Why UK’s net zero plan is still work in progress

In June 2019, the UK became the world’s first major economy to pass laws highlighting its intent to end its contribution towards global warming by 2050. The UK’s ambitious net zero by 2050 target was proposed by the country’s independent climate advisory body, the Committee on Climate Change (CCC).

The concept behind the net zero target is that the emissions released into the atmosphere would be offset by implementing schemes like planting trees or employing low-carbon technologies, which would help in neutralizing the impact of greenhouse gases on the environment. Carbon capture and storage is a great recommendation for the same, which is basically done by solidifying the carbon removed from air and then burying it under the ground.

Earlier, the UK had set goals to bring down the greenhouse gas emissions to at least 80% as compared to 1990 levels, but now the target is to achieve net zero emissions by 2050. The UK decided to become a climate leader as it was responsible for beginning the industrial revolution, which was to blame for the rapid increase in emissions and the overall environmental degradation. 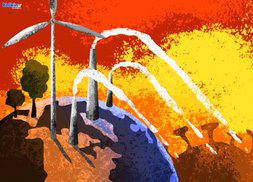 The UK has thus stepped up to put sustainability at the heart of the modern Industrial Strategy, committing to expand economic growth while focusing on reducing emissions. The UK aims to become a greener and cleaner economy and pioneer the way for more nations to follow. Under the strategy, individuals are being incentivized to move away from fossil fuels and focus on renewable energy sources to fulfil their power needs, abandon petrol and diesel cars and switch to electric vehicles (EVs), replace gas central heating by heat pumps etc.

Under its net zero strategy, the UK Government has been spending on the upliftment of the EV industry, creating more EV charging infrastructure and becoming self-reliant in production. Low-carbon heat pumps are being installed, small nuclear reactors are being developed, and the focus on tree planting and peat restoration has been given a push.

Recently in July, the UK government lost the first legal assessment of its ambitious net-zero target as the court ruled that its plans to achieve the target are too vague. A London judge instructed the Government to come up with new assessments about their goal of shedding carbon out of the economy and then publishing them again. The revised draft of the scheme is expected to be come into force by the end of March next year.

A group of environmental activists came up with this legal trial as they believed that the UK Government had laid out a plan to cut down emissions to net zero, but the proposals were quite vague and needed more scrutiny. The campaigners claimed that the Government’s target didn’t even comply with the country’s own climate-change legislation, the Climate Change Act, and they weren’t enough to meet the mid-term goals.

According to a senior lawyer at ClientEarth, which was among the groups that initiated the legal battle, this was a welcome decision, and it would help in combating delay in climate actions as well as inaction. The decision would push the UK Government to address the climate crisis more seriously with a detailed plan of action.

The CCC has recently published a report about how the UK has progressed against its strategy. According to the report, over a third of the reductions in emissions that are required to reach the net zero goal are not covered by the UK’s current policies. The report shows that the UK’s overall progress has created a somewhat mixed picture. Despite 39% of the emissions reductions being backed by plans, about 5% of the needed cutbacks are entirely lacking or are inadequate at present.

As per the report, this issue is specific to methods of low-carbon farming, industrial electrification, and the country’s policy for energy efficiency hikes in non-fuel-poor households. In conclusion, the report showed that the UK has not built enough resilience to tackle the escalating climate change issues and there are still gaps between the plans of the Government and the level of climate risks expected in the future.

The net zero strategy has been supported by all major political parties in the UK as a settled policy until recently. The discussion regarding the UK's pledge to reach net zero has been sparked further over the past few weeks due to a several factors, which include the escalating cost of living crisis, the deadly heatwave, and the need to find a new prime minister. This is despite the fact that the global scientific community has agreed to limit the global temperature rises under 1.5C to mitigate the dangers associated with climate change.

Chancellor Rishi Sunak, who is running the race for the UK PM, has mostly dodged the topic of net zero. Nevertheless, he is committed to the strategy. Several budget statements by Sunak have included the references to net zero transition such as the launch of the £1bn Net-Zero Innovation fund, the creation of the National Infrastructure Bank with climate focused on climate, as well as the introduction of sovereign green savings bonds.

On the other hand, Liz Truss, the other candidate, was working as the environment secretary under the leadership of David Cameron, and her supporters include a few of the highly renowned net zero sceptics. In 2014, she reduced subsidies for solar farms, acknowledging them as blights on the landscape. Although in leadership debates, she showed commitment towards the net zero strategy, she said that better means of achieving the target must be explored, which are more environmentally friendly and would minimize the negative impact on individuals as well as businesses.

The whole world is facing a climate emergency right now and the situation is expected to get worse with time if immediate action isn’t taken by all. Major economies, as well as the smaller ones, are stepping up to tackle the menace of climate change, but the actions currently in place aren’t enough to stop the catastrophe ahead. The UK economy has thus stepped up as a climate leader and is moving towards decarbonisation. Sound environmental legislations will play a key role in the process.