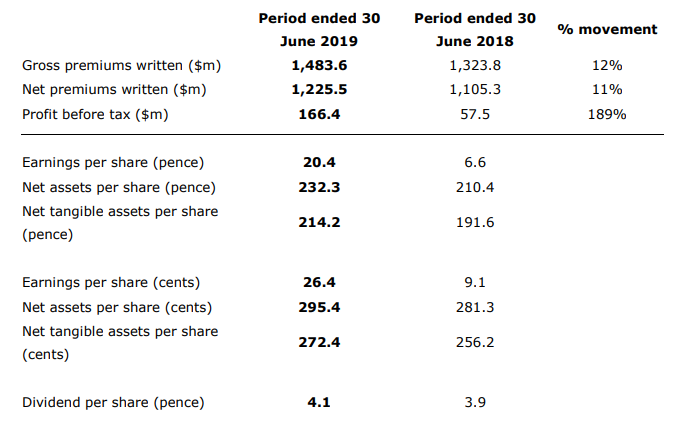 In the first half of the year, the scale of claims had limited the scope for reserve releases, which were $3.4 million as compared to $48.1 million in the same period of 2018. Net investment income stood at $170.3 million, an increase from the previous year same period data.

The board has declared a first interim dividend per share of 4.1 pence, an increase of 0.2 pence against the 3.9 pence in H1 FY18, in line with the strategy of delivering in the range of 5 per cent to 10 per cent dividend growth. On 29 August 2019, dividend will be paid to shareholders on the registered date 2 August 2019.

The company’s growth prospects are looking well-positioned to continue to grow in several markets such as healthcare, cyber, and environmental liability across the years. The company is seeing solid demand from the financial sector companies for a variety of complimentary insurance covers in Europe, Asia, and Latin America.

In the upcoming future, the company is planning to grow in the United States business. The company transact in the United States and is expecting a considerable opportunity for the upcoming growth in all the key lines of business. Changing market dynamics, a continued programme of investment in digital capabilities augur well for the group's future growth. Though, the group is highly exposed to exogenous factors which can severely affect its performance. The potential for a rise in frequency and severity of claims due to climate change can reduce the group's performance.

In the key category, the company’s growth prospect in the business is dependent on market behaviour. From the past two years, the catastrophe-exposed business losses and has also increased the premium rates. The company’s full-year combined ratio will get impacted, which will be in the high nineties.

At the end of the previous year, the company were visualising premium progress in the high single digits in the year 2019. In the financial year 2019, the company had seen the double-digit growth, due to the improving rating environment.

On 23rd July 2019, the company CEO warned that the prices for marine insurance would increase after the seizure of British-flagged tanker in the Strait of Hormuz.

Daily Chart as at 23rd July 2019, after the market closed (Source: Thomson Reuters)

Mondi PLC (MNDI) is an Addlestone, United Kingdom-based multinational packaging and paper company. The company operates in central Europe, North America, South Africa and Russia. Recycled containerboards, speciality kraft papers, corrugated packaging products, industrial bags, films and hygiene components, consumer goods packaging products, printed laminates and high-barrier films for the consumer industry are the products offered by the company. The company is having an employee base of around 26,000 and have operations in over 30 countries worldwide with 100 production sites.

The company has set the performance bar high. Over the last five years, the company has delivered a compound annual growth in basic underlying EPS of 15 per cent, with an industry-leading return on capital employed averaging 20.2 per cent over the same period. The company reported a five-year total shareholder return (TSR) of 74 per cent and recommended a total dividend per share of 76-euro cents. Over the period, the company’s TSR stood at 10.3 per cent for Mondi plc and 13.3 per cent for Mondi Limited, which placed it higher than the median of the comparative group. The company’s rank within the TSR peer group was seventh. The company remain confident to deliver long-term value to shareholders.

The group is presently finalising its results for the H1 FY2019, which will be published on 1st August 2019. In H1 FY2019, the company expects underlying EBITDA to increase from the previous year same period to €852 million. Special items Net charges after-tax are projected to be around €2 million. In the previous year, the company’s special item net charges after tax stood at €81 million. 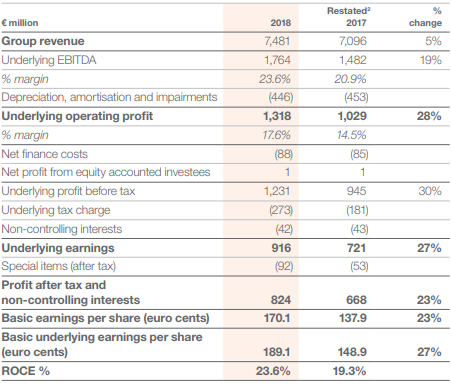 Due to higher average selling prices across all segments, in FY 2018, revenue (excluding the impact of acquisitions and divestitures) was up 4%, while total revenue increased by 5% to €7,481 million. Underlying EBITDA during the year climbed by 19% to €1,764 million against €1,482 million reported in 2017, as a result of the excellent demand in the fibre packaging segment, the contribution from the current acquisitions and surge in average selling prices. The underlying operating profit was up by 28% to €1,318 million in FY2018 as compared to €1,029 million in FY17, while total operating profit was up by 23% to €1,192 million. Profit after tax attributable to shareholders accelerated by 23.4% to €824 million as compared with the financial year 2017 data of €668 million. Basic earnings per share (EPS) rose by 23% in FY2018 to €170.1 cents, while basic underlying earnings per share during the year were €189.1 cents, up by 27% against the previous year. Bringing the total ordinary dividend for the year to 76-euro cents per share, the company recommended payment of a final ordinary dividend of 54.55-euro cents per share.

Strategic acquisitions, along with strong organic growth, have considerably improved the company’s financial position, which has made the market confident about the prospects of the business. The company has also maintained its leadership position in both sustainable packaging and e-commerce. Also, a new project at the Steti mill to expand kraft paper for shopper bag capacity has been announced. Weakness in Consumer Packaging has continued mainly due to declining volumes in the personal care segment, but Mondi expects improvements in 2019. Strong production capabilities, vertically integrated operations, a wide range of end markets, business performance of fibre packaging segment and focus on sustainability are the company’s key strengths, even as financial leverage and safety issues remain causes for concern. Rising demand for containers and packaging in Europe, acquisitions, the launch of new products, strategic investments and restructuring could provide growth opportunities to the company.

Daily Chart as at 23rd July 2019, after the market closed (Source: Thomson Reuters)