Barratt Developments PLC (BDEV) is Coalville, the United Kingdom based holding company. The group engages in acquiring and developing the land, obtaining planning consents, and constructing residential property developments and selling the homes, which is built by it throughout Britain. The group's operations are differentiated in two segments: Housebuilding and Commercial developments.

During the financial year ended 30 June 2019, the companyâs reported wholly owned completions were up by 2.6% to 17,111 homes, while total homes completed including joint ventures were 17,856 homes (2018: 17,579 homes). Despite underlying house price inflation, changes in the mix helped the company to report total average selling price for the year of approximately Â£274k (2018: Â£288.9k). Driven by the benefits of the new product range delivery and sites purchased at higher gross margins, underlying operating margin improvements was around 120 bps, as the company expects to deliver an operating margin of around 18.9% (2018: 17.7%). Reflecting contribution from joint ventures, a strong close to the year and continued strong progress from margin initiatives, profit before tax is expected to surpass the market expectations at around Â£910 million. As at 30 June 2019, the Group had a net cash balance of approximately Â£765 million and total forward sales (including JVs) was Â£2,604.1 million, indicating a strong forward sales position.

In the first half of FY 2019, an interim dividend of 9.6 pence per share was announced by the company, an increase of 11.6% and in line with the policy of paying ordinary dividends covered 2.5 times by earnings. Additionally, the company plans to pay Â£175m in November 2019 and November 2020 as part of the capital return plan. As on 15 July 2019, the dividend yield of the company was 4.39%. 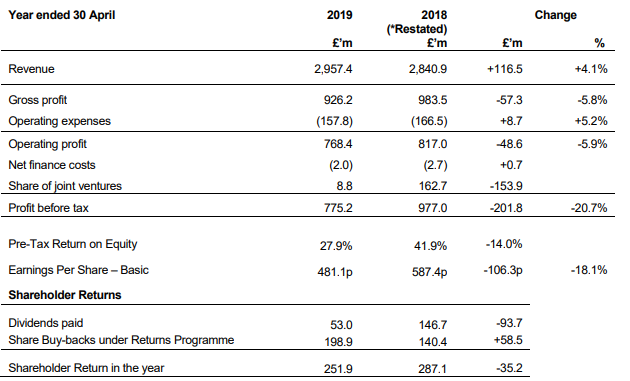 Taylor Wimpey PLC (TW) is a United Kingdom-based residential housing developer which operates at a regional level from 24 local offices across the country. It is one of the UK's largest residential developers and builds a wide range of properties, with a broad price range. The companyâs operations are differentiated in two geographical segments: Housing United Kingdom and Housing Spain. The Housing United Kingdom segment is further sub-divided into North, Central and South West, London and South East (including Central London) and Corporate.

For the period 1 January 2019 to 25 April 2019, the company reported that the housing market remained stable despite wider macroeconomic uncertainty. Demonstrating continued progress in optimising larger sites, and ahead of expectations, the company reported that average private sales during the year to date were 1.03 per outlet per week, while cancellation rates remained low at 13%. Total order book value was approximately Â£2,399 million as at week ending 21 April 2019, indicating a strong order book. Due to exchange rates impact on the cost base of suppliers and underlying cumulative inflation, the company expects to build cost inflation for 2019 to be around 5%. After dividend payments of approximately Â£600 million, net cash position at the end the year is expected to be Â£500 million.

Countryside Properties PLC (CSP) is United Kingdom-based home builder and regeneration partner, which delivers private, affordable homes in partnership with local authorities or on land owned or controlled by the company. The companyâs business is differentiated into two divisions: Housebuilding and Partnerships.