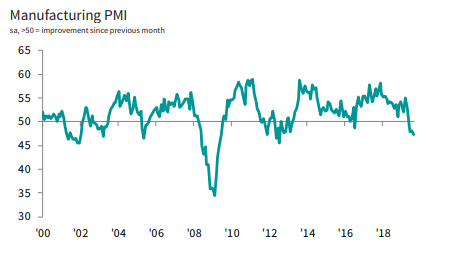 The recent data on UK manufacturing PMI, which was released by IHS Markit/CIPS on September 02, 2019, revealed that manufacturing activities in that country are in bad shape and contracted to an 85-month low at 47.4 and was also lower compared to the July 2019 Manufacturing PMI of 48.0.

Heightened economic and political uncertainties over domestic and global markets continued to weigh heavily on the performance of UK manufacturing in August as well. A steep contraction in the new order inflow pushed output volumes downward, and business confidence was jolted to a record low level as well.

As per the survey data collected between August 12 to August 27, 2019, the headline manufacturing PMI at 47.4 plunged to its lowest level since July 2012. The deepening contraction in manufacturing activities was largely on account of accelerated slowdown in a new work orders at a much faster pace than in the past 85months.

The downtrend in the new order inflow was recorded in sectors like consumer, intermediate, and investment goods industries contributing to prevailing downturns in output in all the three product categories. However, deceleration in new orders was mainly recorded because of challenging global and domestic economic conditions, Brexit-related uncertainty, weaker market confidence and softened consumer spending.

The reason behind contracting manufacturing PMI

Majority of respondents surveyed between August 12 to August 27, 2019, blamed that ongoing trade spat between US and China, plummeting world economic growth and apprehensions related to Brexit were root causes behind the contraction in manufacturing activities in August 2019. Also, it was revealed that several European Union-based clients of British manufacturers were diverting supply chains away from the United Kingdom primarily because of escalated uncertainties over the impending no-deal Brexit. During August 2019, new work orders from Asia and the US also witnessed softening.

In August 2019, jobs in manufacturing got wiped out at a greater pace than over the last six-and-half years. Reduction in jobs was mainly because of cost-saving initiatives, slower economic growth and impact of Brexit-related headwinds. Finished goods inventories moved a bit higher, but input stocks moved lower. These trends reflect that companies are clearing some of their stockpiled inventories which they built during original "Brexit day of March 31, 2019".

Input price inflation remains steady in August 2019, and 80% of the respondent companies covered in the survey have blamed exchange rates for higher input inflation during August. This has led manufacturers to pass on some of the inflated costs to their respective customers which further led to an increase in selling prices. The highest increase in rates was seen in the intermediate goods sector.

During August 2019, both international and domestic demand softened, with export demand witnessing the highest fall over the past seven years. The weakening global economic growth was the prime reason behind this contraction in new work orders received from the European Union, the USA and Asia as well.  It also coming into the picture that some of the EU-based clients of the UK manufacturers were routing their supply chains away from Great Britain due to ongoing Brexit imbroglio.

He also added that heightened economic and political uncertainty and enhanced trade rifts between two large economies in the world dragged the performance of the Britain manufacturers in August 2019. Business conditions were challenging and deteriorated to the largest extent in the past seven years, as many manufacturers scaled back production due to the sharp reduction in new order inflows since mid of 2012. The outlook is also looking challenging as there are multiple headwinds to drag business confidence further.

The illness within the manufacturing took a turn for the worse in August with a steep drop in the international and domestic orders over the past seven years. As preparations for Brexit are gaining ground, some firms are opting to add to inventory while others are de-stocking. While some supplies have been affected by delays at ports and poor performance by suppliers, the sector is expected to encounter more hindrances ahead.

In the survey reports released by IHS Markit for the month of August 2019, it was revealed that factory output has also declined by approximately 2% on a quarter-on-quarter basis while manufacturing activities make up for 10% of the UK’s economic output.

Latest surveys revealed by Lloyds Bank and the European Commission in late August 2019, also reflected that  the UK's economy is deteriorating, raising the stakes for Prime Minister Boris Johnson, who has promised to take the UK out of the EU bloc with or without a deal on its scheduled date of October 31, 2019.

IHS Markit compiles the manufacturing PMI from questionnaires sent to the purchasing managers of a group of around 600 manufacturers, and the group is classified by specific sector and company workforce strength, based on their contribution to Gross Domestic Product. Then the responses to the questionnaire distributed among a panel of 600 manufacturers are collected in the second half of every month, and it captures a deviation from that in the previous month.

It then gets measured on the scale which varies between 0 to 100, where a reading above 50 reflects a positive change against the previous month or an expansion in manufacturing activities while on the other side, a rating below 50 reflects a contraction in such activities.

The hidden interest behind Brexit

As many have mentioned, the EU has imposed too many rules and regulations on the businesses and the UK is paying billions of pounds every year as membership fees and gaining little compared to the quantum of payment. The UK lawmakers also want to enforce their own laws and provisions rather than implementing the consensus laws decided by the EU member countries. Another crucial reason why people are supporting Brexit is because of the Immigration problem. Pro-Brexiteers want complete control on the country’s borders, and they want to reduce down the number of people coming into the UK to live or to work as Free Movement is the spirit of the EU nations, which allow citizens of the EU member countries to move freely across the EU, without any visa.