As it is widely considered, housing prices will unquestionably be impacted by events in the wider economy. The single biggest growth engine for both prices and activities over the long-term remains the paucity of available properties to fulfil demands from buyers.

As per the latest data released by Halifax as on September 06, 2019 at 08:30 AM GMT, and house prices grew by 0.3 per cent on a month-on-month basis and average price was around £233,541. On a quarter-on-quarter basis, house prices in the United Kingdom improved marginally by 0.1 per cent and on a Y-o-Y basis, it recorded a growth of 1.8 per cent respectively.

Russell said, and I am quoting that, "a real shift in the UK properties prices was zero as the average hosing prices increased slightly by just 0.3 per cent on a month-on-month basis. This makes a flat trend we have witnessed over the past six months, with average housing prices having hardly changed since March 2019."

Ha also added that" while ongoing macro and microeconomic challenges will continue to weigh heavily on the housing market and on consumer sentiment as well, with adequate evidence that shows both buyers and sellers exercising some caution, however a range of significant underlying factors such as affordability and employment remain strong.” 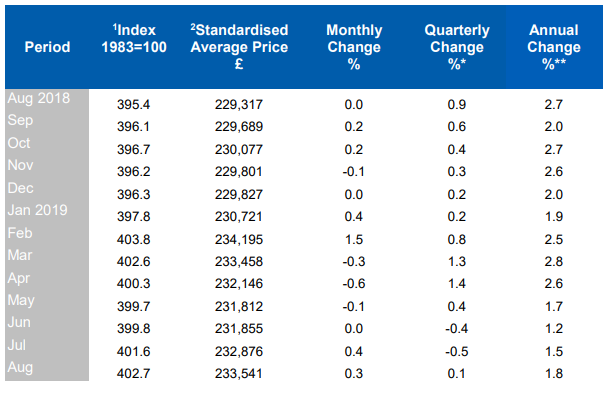 The above historical data depicts that, since July 2019, the trend is reversing, and prices are increasing up slowly against the three consecutive months of decline that started in March 2019 and continued till May 2019.

Gold and Bitcoin are widely considered as the counterparts to each other. Like Bitcoins, gold is also produced through mining. However, gold is produced through physical mining, but bitcoins get mined virtually through the supercomputers. Another commonality between gold and bitcoin is that both are available in limited quantities. And it is calculated that around 171,000 metric tons of gold are available in the world and bitcoin miners estimate that they will be able to mine maximum 21,000,000 bitcoins till the time there are further technological advancements.

Is bitcoin all set to replace gold?

At this juncture, it clearly seems to be tough as there are substantial unfavourable reasons why this shift is not likely to take place. One very significant reason why bitcoin would never be able to occupy gold’s position is because it still carries a humongous amount of financial risks. Despite recent massive rally recorded by bitcoin in terms of market value, it continues to witness significant price volatility that often results in erosion of wealth.

In addition to it, the future of bitcoins is yet very uncertain, as investors are very much concerned over their virtual savings and fear hovering around them that the virtual system could be terminated or become obsolete. Surrounded by sheer amount of uncertainty and volatility in prices, the bitcoin is not likely to create a customer base at par with that of gold. Also, legal status is a big problem for bitcoin as well, as many countries have yet not extended a legal status to Bitcoin.

The debt-to-GDP ratio is surging globally since 2012, and it is good for gold as an asset class that tends to soar as debt-to-GDP ratio surges. And, gold-mining costs are shooting up, and if it continues, many miners will stop operations that will lead to an increase in the gold prices as gold reserves become limited.

However, over the last five years, bitcoin has delivered a compounded average growth rate of 99.9%, whereas gold prices have surged with a CAGR of 3.9% during the same period. Also, on a Y-o-Y basis, bitcoin leapt up by 74.1%, while on the other side, gold is up 23.53%.

Further, gold prices are directly proportional to an uptick in inflation, and as inflation rate increases, this will push gold prices higher as well.

Let’s understand bitcoin and its usage

Bitcoin is a digital or virtual cryptocurrency, which is independent of any country or geographical entity and accessible to anyone who is connected to the internet. It is stored in "Bitcoin wallets", similar to you storing your savings into your wallet or in a bank account. Everything is done electronically, and no fiat currencies like GBP, USD, YEN or any other is involved. Unlike fiat currencies, bitcoin is not regulated by any central authority or by any country.

Bitcoin is considered as fiat currency of the internet and anyone can easily access it and own it. It provides an independent stature because everything related to this virtual currency is controlled by the varied users, who are using it. The best thing about this currency is easy mobility all across the world with very minimal transaction costs. Your transaction also remains highly secure and only the depositor and the receiver know who is engaged in the executed transaction.