Service activities stabilised in December 2019, supported by a rebound in new work. According to the latest survey released by IHS Markit as on January 06th 2020, the IHS Markit /CIPS UK Services PMIÂ® Business Activity Index stood at 50.0 in December 2019, an increase from 49.3 points recorded in November, in the same year. Which reflects an overall stabilisation in the UK service activities.

During December 2019, some respondents reported that there was an uptick in the underlying customer demand, which was witnessed at the end of 2019, however, those who reported a drop in output, blamed a delayed spending ahead of the general elections.

However, the latest Service PMI data reported by markiteconomics shows a fair overall growth of new work received by the UK's service providers and also put an end to three months of consecutive declines.

The report also reveals that internal political uncertainties in the UK in the wake of the General Election was the crucial factor weighing on new orders. However, more export-oriented sales dipped in the four months to December 2019, which typically synched with a lack of clarity over Brexit.

Numbers also suggest that service providers have become hopeful that a more stable political setup would support business conditions during 2020, with many respondents looking for a short-term stimulus to the business activities when the first stage of Brexit is resolved on January 31st , 2020- marketeconomics.com report.

Â Job optimism has also improved in the recent survey, which was partially driven by a rebound in business optimism to its highest for 15 months; also rising workload and improvement in the business confidence strengthened a marginal surge in staffing levels across the service industry during December 2019. The trend reversal in employment was the sharpest in the past five months, despite reports to the contrary suggesting that heightened business risks ahead of the December 2019 general elections had prompted businesses not to fill the posts vacated by some voluntary quitters.

However, the final reading has increased one point from the 49 of the flash estimates which reported response collected before the December 12, 2019 general elections, when halted spending decision weighted on new orders, as per the report.

Meanwhile, Thomas Pugh | Economist at Capital Economics said; a stonking victory of the Conservatives on December 12, 2019, the general election seems to have given the services PMI a boost in the UK.Â

Business Confidence including post-general election responses, increased 66.3 against 62.9 reported in November 2019, which is the biggest reading since September 2018, while new orders stood at 51.2, the highest reading since July 2019. 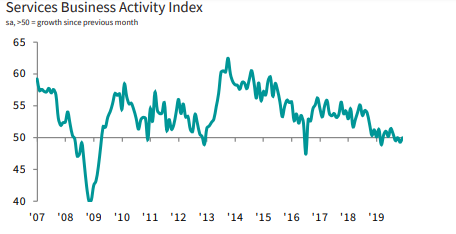 The seasonally adjusted IHS Markit/CIPS UK Composite Output Index stood at 49.3 during December 2019, remained flat from the level last seen in November 2019 and marginally below the neutral 50.0 threshold. This was largely driven by an accelerated decline in manufacturing output index to 45.6 and partially offset by a stabilisation in services sector activity at 50.0.

Construction activities have also slumped in the UK during the last month of 2019, leading to a PMI all sector index (which gauges the health of three sectors) remained unchanged at 48.9.

A slightly less volatile picture was portrayed in December 2019 as the service sector was rescued by a marginal uplift in new orders for the first time since August 2019 and elevating it out of its turmoil but only just. However, European buyers were relatively less convinced, witnessing prevailing Brexit uncertainties and were shy to open the strings of their wallets.

He also added that any augmentation in the fortunes of the sector is desirable, but this marginal improvement to the no-change mark also suggests a stagnation kind of situation is also possible. Also, the lowest price influenced inflation from July 2016, driven by heightened competition within the companies, suggests that companies are not able to pass on increased costs to their customers and a further surge in energy prices could jolt the sector's hopes of realising improved margins in the next couple of months.

From the above rationale, we conclude that Brexit transition trade negotiation would continue to weigh on the UK businesses in the coming months; however, a short-term uptick could be witnessed in near-term in the wake of the first stage Brexit movement, which is due to take effect on January 31st, 2020.