British Treasury Unlikely To Come Out With Big Tax Cuts; How Does The UK Corporate Tax Structure Compare Globally?

The UK Treasury counsellor Rishi Sunak is under pressure from the people as he prepares to release his new economic statement during the next week starting 6 July 2020.

The tax revenues in the country are already lagging behind their targets for the year 2020, due to the devastating economic impact of the coronavirus pandemic. So, while all eyes are on him to cut the prevailing VAT rate of 20 per cent, he may not actually be able to do so. Instead, he might be looking at something that boosts the job growth across Britain, as that seems to be a bigger cause of worry to him at least for the time being. The government’s ongoing job retention scheme has kept more than 9 million people furloughed, and will end this October. The unemployment levels are predicted to touch almost 10 per cent, if these jobs are not protected or new ones are not created, somehow or the other.

According to media sources, a wage subsidy announcement might be on the cards for companies hiring new employees.

Looking at the bigger picture, Sunak’s main challenge remains to get the economy back on its feet, without the clutches of any more stimulus supports, as fast as possible. This would mean that consumer spending gets back to what it was and companies restart their production and selling routines as they were doing before the coronavirus hit the world.

While it can’t be denied that the sectors which are worst affected by the pandemic led crisis, such as hospitality and tourism, are looking out for temporary reduction in tax rates.

Coming back to the British taxes, it is a good idea to see the current position of the overall tax revenues of the UK government, particularly from the business tax side, and also to then compare the country’s corporate tax rates with rest of the world.

Status of the overall tax collections in the UK

The total amount of tax collections in the United Kingdom have fallen from approximately 30 per cent of the country’s GDP (Gross Domestic Product) during mid-80s to mid-90s to about 25 per cent in the twenty first century.

(Source: Her Majesty's Revenue and Customs, Government of UK)

The taxes are divided into following broad categories in Britain:

The business income is taxed in the form of bank levies and surcharges, and taxes like corporation, profits, and petroleum revenue. 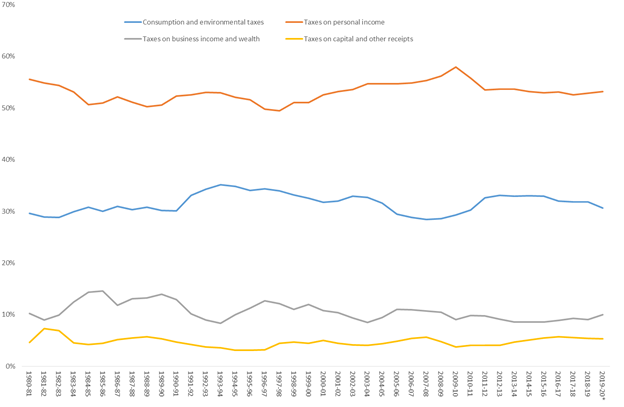 (Source: Her Majesty's Revenue and Customs, Government of UK)

While the personal income taxes are the highest contributors to the overall tax revenues for the British government over the years, the lowest contribution comes from the category of “taxes on capital and other receipts”.

The corporate rate is known as the corporation rate in the United Kingdom.

A comparison of UK’s corporate tax rates with the other prominent nations of the world reveals that the rate is on the lower side only, with little room for maneuvering. In the table displayed above, the countries which have a 30 per cent rate of corporate income tax are Australia, Germany, and Japan. The countries with a 25 per cent corporate tax rate are China, the Netherlands, and Spain.

Closer home, a basic comparison of the prevalent rates of VAT across the European countries shows that Hungary (27), Coratia (25), Denmark (25), and Sweden (25) have the highest rates while Luxembourg (17), and Malta (18) have the lowest ones. VAT rate in the UK is 20 per cent, which is on the lower side only, as compared to other countries in Europe.

On 26 March 2020, the HMRC had offered struggling businesses with an option to defer VAT payment for the year 2020 till March 2021, to provide Covid-19 financial support. This move is expected to delay VAT collections for the government of UK significantly, and there could be a shortfall in the total annual value added tax collections for FY 21 as compared to FY 20. So again, it is up to Sunak to see if can tinker with the existing VAT rate, in these testing times of already falling tax revenues.

To conclude, Andy Haldane, chief economist at the Bank of England had recently said that there is enough pent-up demand in the economy to push Britain back to its pre-Covid economic activity levels, which also implied indirectly that the country may not after-all require a very large economic stimulus. The possibility of lowering taxes is slim, with a tender fiscal position of the exchequer. Sunak will pass his litmus test if he can encourage British firm to retain its staff and maybe hire few more during these tough and uncertain corona times.