As another week comes to an end, let us look at some of the top announcements made in the country. 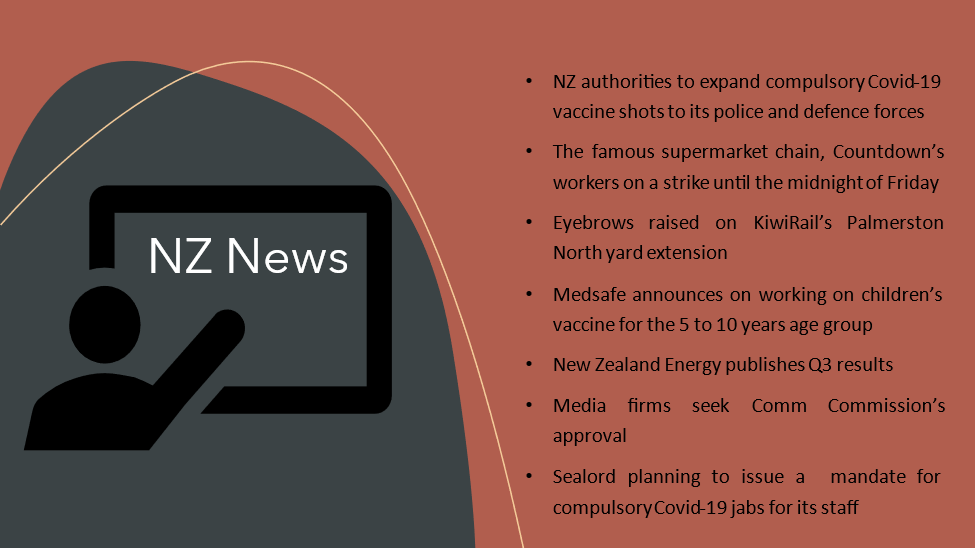 The NZ Government has announced extending workplace vaccination requirements to its Police as well as Defence forces.

Related Read: What is Rapid Antigen Testing? All you should know about it

It is noted that the first vaccine dose for these forces is required by 17 January and the second dose by 1 March 2022.

Countdown workers on a strike

Countdown, the famous supermarket chain of New Zealand, is experiencing a workers' strike, which began at midnight on Tuesday and will continue until midnight Friday.

Around 700 of its distribution workers were on strike after the supermarket declined to give pay hikes in line with the consumer price index.

Do Read: How are 5 NZX retail stocks doing amid sharp rise in imports?

Hence, it is considering transforming 177 hectares of land for the same, the cost of which is over NZ$1 billion for the first stage.

Related Read: KiwiRail may have to pay a NZ$250,000 fine to Auckland Transport

However, it has raised concerns as the said expansion would come down heavily on farmers' fields and lifestyle properties near the said region.

Medsafe announces it is working on children’s vaccine

Medsafe revealed that it would continue to assess Pfizer vaccines to be administered to kids during the Christmas break.

The agency spokesperson stated that Medsafe was working hard to evaluate the vaccine for the 5 to 11 years age group.

The Company is engaged in oil and gas exploration in New Zealand and is expecting to commission a new compressor for gas lifting in Q5.

The News Publishers' Association of the country has applied to the NZ Commerce Commission for the grant of approval on behalf of its members and other media firms to bargain with Google and Facebook on issues related to the fair payment for the Kiwi news content to appear on their platforms.

The association seeks approval for a period of 10 years.

Sealord to mandate COVID-19 jabs for its staff

NZ’s biggest fishing company, Sealord, is planning to introduce compulsory vaccination to most of its employees.

A Quick Read: How are NZX fishing stocks faring?

For this, it has asked for feedback by 3 December.

It is noted that the said vaccine proposal would affect its 800 Kiwi employees out of the total 1200. Meanwhile, all its Australian staff has been doubled vaccinated.