The world witnessed its worst week since the onset of the Coronavirus pandemic, as it clocked 5.71 million cases last week.

Primary driven by surge in India, the weekly global cases have grown sequentially by 8% from 5.3 million from the preceding week. If the surge in cases continue, experts fear that world might see one million COVID-19 cases in a day, in coming weeks.

The world has seen a similar increase in the number of deaths, which have touched a new weekly peak of 88,738 now.

To put the severity of the pandemic in perspective, the world witnessed 568 new infections and nine death every minute due to COVID-19, last week. Simultaneously, data suggests that the countries across the globe have now vaccinated one billion people.

However, the surge in cases in world are driven primarily by its second-most populous country – India. While most of the world witnessed its weekly cases coming down, India saw its weekly cases surge up by 58% to 2.17 million. The country made up a whopping 38% of the fresh cases on the planet – disproportionately higher than its share in the world population. 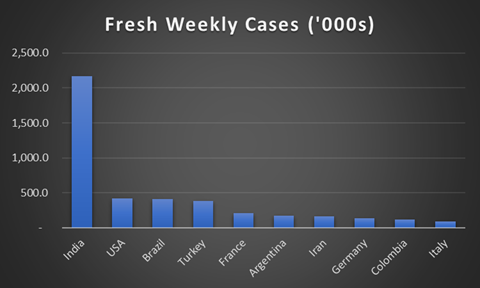 Even as the fresh infections has been going up throughout April in India, it took a deadly turn this week. The weekly deaths in the country shot up by mind-boggling 93% as they crossed 10,000-mark for the first time since the onset of pandemic -- 15,142 deaths in a week. 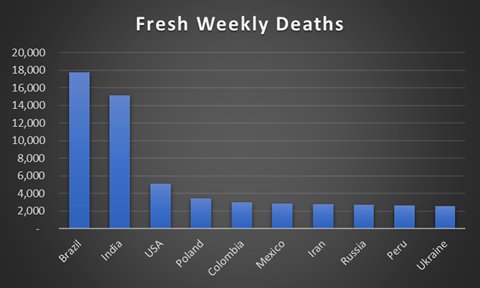 Despite this increase in Indian fatalities, officially Brazil continued to remain world leader in number of COVID-19 deaths – with 17,720 Brazilians losing their lives to virus in the week.

The death count does not, however, include may people who have died outside the gates of hospitals in the country, waiting for their turn to save themselves as the healthcare across the country has collapsed. The have been concerns raised about the authenticity of fatality count in states like Uttar Pradesh, Madhya Pradesh, Gujarat and Karnataka.

Also Read: India’s Rising COVID Cases A Cause of Worry

Some experts say that the actual count of deaths in the country is way higher than the deaths.

As the country’s healthcare system has collapsed, there is a increased talk of global help being provided to India. While Singapore has given four oxygen containers on Saturday, the neighbouring Pakistan has also been offering to help.