Lately, the Wall Street tech stocks experienced the worst backlash since June, as the Nasdaq Composite dropped by 5%, followed by other indices like Dow that lost more than 800 points and the S&P 500 that fell by 3.5%, as on 3 September 2020.

Did you read; Dow Jones, Nasdaq, and FTSE 100- What Are the Chartists Looking At? 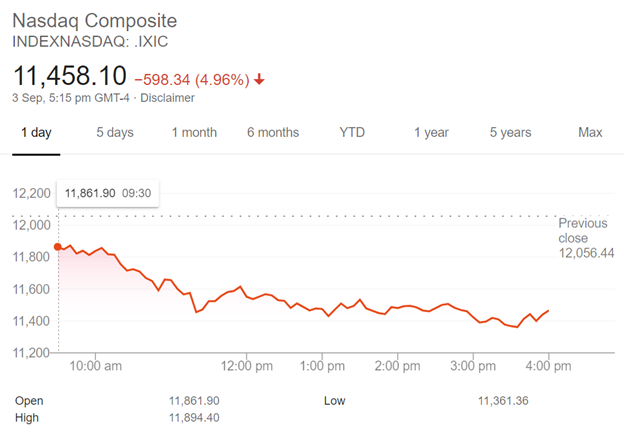 Just earlier this week, the Nasdaq saw a rise close to 1%, securing more than 12,000 points. Following the Nasdaq, the S&P 500 similarly made a new record on Wednesday, before stocks erased the whole profit.

Nasdaq is essentially a marketplace where investors can spend their money for shares within the electronic and technology department.

It was created on 8 February 1971 by the National Association of Securities Dealers (NASD).

The idea behind Nasdaq was to create a transparent marketplace that could be accessed via computer in a fast and efficient manner.

Microsoft, Apple, Amazon, and Google are some of the most successful businesses who sell their shares on the Nasdaq Composite, an index with more than 3,000 stocks.

Why did this happen?

Nothing similar happened to the Nasdaq in its history.

Since the beginning of this year, the Nasdaq has been doing a lot better than its two competitors, the Dow, and the S&P 500.

The Nasdaq continues to be 28% up since the beginning of 2020, leaving the competitors far behind. The Dow remains to stay in the negative numbers, even though 2020 made some positive numbers for the stock market.

DO READ: Understanding Investment Strategy - 'Dogs Of The Dow'

Experts think that the investors saw the opportunity to run away from these stocks, as they appeared to be overbought to them.

Another assumption why this plunge happened are disputes between the USA and China.

It is thought that the investors oversaw the very public issue between the two powerful nations, believing it would be the best to leave the tech stocks behind, which would be affected the most in case of a rise in costs.

As a result of a slow economic recovery, shares within the cyclical sectors are getting more popularity.

Do read; A Quick Review of Cyclical Industry

Overall, the drop in tech shares was expected, as the stock markets in general never have a straight line of either success or a downfall. Long-term expectations remain positive for the market because the interest and support for technology has not altered, even though the performance of the technology shares was amid the worst on Thursday (3 September 2020).