Gold has a kind of reputation that the moment someone mentions it, everyone immediately thinks of wealth and being rich.

For many years, which will be approximately thousands of years to be precise, gold has been looked upon as the most precious asset. Up to this day, it is still considered as a safe haven because it behaves differently when fiat currencies are inflating.

There are multiple ways through which investors put their money into gold.

They either purchase literal gold coins or bars, which have the equivalent value of the actual metal itself. Another way is to put investments into gold shares, popularly known as exchange-traded funds (ETFs). The last option is to directly invest in gold miner companies that are either small, middle-sized or big gold specialists.

Did You Read: What made ETFs a Star Investment Opportunity During COVID-19 Crisis?

How did gold become valuable?

Since the beginning of time, ancient generations appreciated the value of old, even though it was not considered as currency, at that stage. Interestingly, the ancient Egyptians understood the beauty of gold, as they were using it for their jewellery back in 2000 B.C. 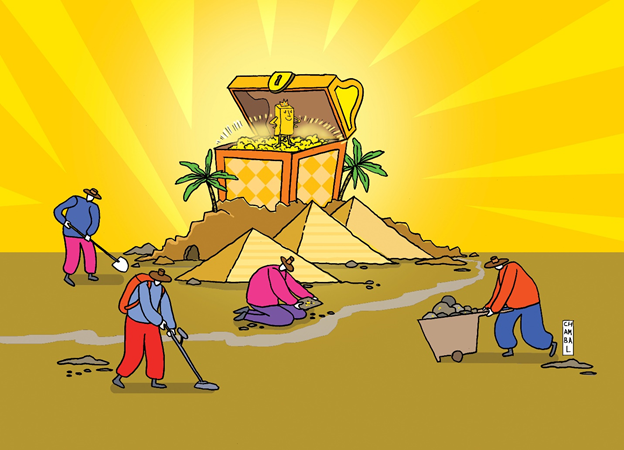 Later, when gold became a new currency, people wanted to simplify their trades so that there was no barter system. In 506 B.C, gold coins were formed and are now considered as forerunner of all currencies, alongside golden jewellery that was already accepted as a way of trading goods and services.

Many years later, more developed European countries, like the UK, started putting Roman and Greek golden antiques in their museums. The UK also founded its own currency based on metal back in 775 AD. The worth of the British pound represented value of precious metals (a pound of sterling silver). Since then, gold has earned the respect and associated with wealth across Europe, Asia, Africa, and the Americas.

One of the reasons that is also worth mentioning is the effort that was made to find and unearth gold from the ground – every asset is worth more if it is rare and hard to get, just like diamonds and other precious stones or metals.

What is the US Bimetallic Standard?

Similar to the British pound, the US dollar used to represent a particular amount of gold. The USA established the bimetallic standard in 1792, establishing the worth of US$1 as 24.75 grains of gold.

In the 1900s, this standard was replaced by fiat currencies, resulting in removing gold from the monetary system. The Federal Reserve was created in 1913 that started creating promissory notes, which can be compared to present day cash.

1934 was an important year because of the foundation of the Gold Reserve Act, which allowed the US government to be in charge of all golden coins in circulation, as well as preventing any gold coins from minting. 1971 was the year when the USA left out gold from monetary policies for good.

In what form is gold most desirable?

Jewellery industry makes up about 50% of the total gold demand. The rest of the demand comes from physical investments – gold that is needed for bars, coins, bullions (golden bars that contain the purity and weight of the bar) and medals.

Up until recently, central banks and individual investors had the most interest in gold, but exchange-traded funds have lately become a thing so more investors choose to purchase gold from a trusted supplier.

Another form of gold demand is within industries that use tech gadgets, heat protectors and dental medicine, because gold is a good electricity conductor.

How is the price of gold established?

Very similar to cryptocurrencies, the price of gold is determined by supply and demand. The demand usually comes in two ways:

Interesting read: Golden State Mining – Spotlight on Success at the Yule Project in 2020

Does gold have an infinite supply?

Though, gold is present in abundance in nature, however, it is tough to dig out so in theory, it does not have an infinite supply. However, there is no certainty that gold will not form in some way underground or underwater – it just might be too expensive to find. That said, availability and supply of gold are two different things.

Did you read: A Run Through Bassari Resources’ Investor Presentation – ‘Makabingui Gold Project Toward Production and Expanding Gold Reserves’

Ocean water contains small amounts of gold, but it takes a lot of time and effort to extract it, which is why investors usually run from that method as it is often more expensive than the value of gold itself. Some research has shown that if the gold worth increased high enough, it could be profitable to start extracting it from water and deep-sea soil.

However, World Gold Council estimates there are around 196,576 tons in total underground, with 54,000 tons available using current technology for extracting gold.

Gold as a ‘safe haven’

As demonstrated on multiple occasions, the price of gold is not influenced by current affairs in the country. For that reason, almost all investors have a portion of their portfolio invested in gold, as it comes handy when traditional financial markets experience a downfall.

However, a recent challenge that has emerged is bitcoin along with other cryptocurrencies. For newer generations to come, they might seem more attractive as they are digital assets and there is no need for storing physical gold. Most experts still believe that nothing could replace gold as we know it, but only the future would tell.

Interesting read: Bitcoin vs Gold: Can the cryptocurrency replace the oldest safe haven?