Uber’s latest quarterly numbers reflect the struggle brought in by COVID-19 after the company was seeking to deliver profitability. In the June quarter, its food delivery business came better off the ride services.

Uber incurred a loss of $1.8 billion during the quarter, including share-based payments and restructuring expenses of $131 million and $382 million, respectively. Unrestricted cash, short term investments and cash equivalents were $7.8 billion.

Mobility segment delivered adjusted-EBITDA of $50 million, down significantly compared to same period last year despite a 73% fall in the gross bookings. Delivery segment adjusted-EBITDA was negative at $232 million, an improvement of $54 million year-over-year.

CEO, Dara Khosrowshahi said they have a ‘natural hedge’ across two segments along with a global footprint. He reaffirmed their target to achieve adjusted EBITDA profitability by the end of 2021.

Related: Uber Announces Latest Results, says it will be Profitable by 2020, Ahead of Target! 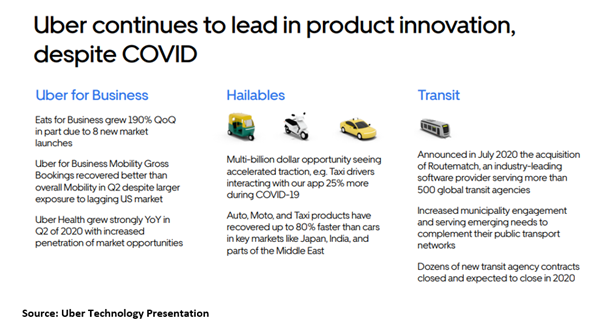 Gross bookings in delivery were accelerated amidst the pandemic- induced home delivery demand push. It also helped to improve adjusted-EBITDA to a loss of $232 million. Uber Eats crossed 500k active partnered restaurants in June, up by 50% year-over-year.

Uber also started new verticals in a delivery segment with the introduction of grocery, pharmacy, convenience to accommodate the growing consumer demand. Uber Connect was launched in over 170 cities, allowing to send small packages. It was said that Uber Connect completed around 3 million trips since mid-April.

Uber ATG recommenced test track and public road operations for self-driving vehicles in Pittsburgh after a period of simulation-only development. The company also extended its strategic alliance with American Express, which offers Uber cash to some of its customers.

It also completed raising $1 billion in senior unsecured notes due in 2025. Uber intends to use the funds for working capital and general purpose, including potential acquisitions.

Uber Technologies has agreed to acquire Postmates in a $2.65 billion all-stock transaction, which would complement its mobility and delivery business. It also completed the purchase of Cornershop in all jurisdictions, except Mexico.

Cornershop transaction has allowed the company to offer groceries on Uber and Uber Eats app in some cities in the US, Canada and Latin America. Uber also completed the acquisition of Routematch, which provides software-as-a-service solutions to public transportation bodies in North America and Australia.

2019 may have ended on a bullish note, but the beginnings weren’t so pleasing. While markets became accustomed to reacting on tweets, the signs of a slowing global economy were visible at the backdrop of geopolitical developments like Brexit and China-US trade tensions.

In the first half of 2019, public markets grew uneasy about the near term outlook of the global economy. And, loss-making enterprises with perhaps ‘unproven business models’ were inclined to hit public markets.

WeWork IPO was not able to sale through after investors raised multiple questions in its business model, corporate governance and profitability.

Moreover, investors reiterated that the ultimate exit route of private investors remains public markets. And, if valuations do not complement investor expectations, it is possible that the business may not be well-received.