The luxury jewellery and speciality retailer from the United States (US), Tiffany & Co. got a rude shock and took legal actions against LVMH, a French multinational company that specialises in luxury goods. The lawsuit followed the crucial development in which LVMH told Tiffany that it could not complete a $16 billion acquisition deal due to the request from its government and the economic impact of the coronavirus pandemic.

Why did the French govt intervene in the LVMH’s acquisition deal of Tiffany?

LVMH said that the French foreign ministry sent a letter to the company’s board stating to postpone the buyout deal till 6 January 2021. It is to be noted that due to some recent developments regarding international tariffs, it is likely that the US could impose additional duties on various products from France. A spokesperson from the French government mentioned that the letter carried political value and suggested to alert LVMH regarding the risks of pursuing the acquisition of Tiffany as France has a dispute with the US over trade tariffs. However, the government’s communication to LVMH was advisory and not binding.

The latest intervention from the French government marked the twist in the endeavours regarding acquisition arrangements between some of the most high-profile luxury brands in the fashion segment. LVMH (Moët Hennessy Louis Vuitton) is led by billionaire Bernard Arnault, the company’s chairman and CEO.

Meanwhile, White House is yet to respond on this matter, especially with concerns around interventions by the French government in the acquisition deal. Several experts remained doubtful of France’s efforts to use LVMH’s bid for the US retailer Tiffany to leverage in its trade dispute with the US. On the other hand, some experts pointed out that though the French government’s defensive measures of defending the French national interest revolves mostly around preventing the acquisition of French companies.

The Latest Chronology of Events Related to The Deal 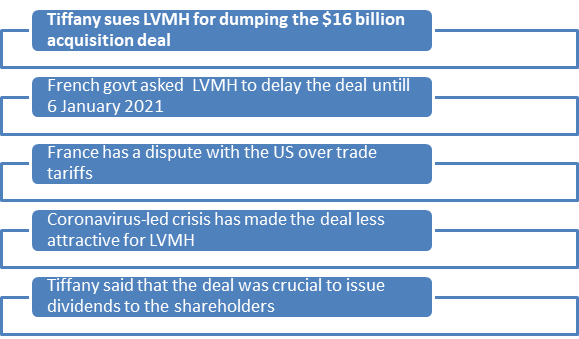 Trade war between France and the US

In July 2020, the US government had announced that it would impose new duties on $1.3 billion worth of French goods like cosmetics, handbags, soaps in retribution for a French digital tax that hurt the US technology companies like Amazon, Google and Facebook, among others. This accelerated a trade war that could hamper the global economy. The 25 per cent tariff was however delayed for around half a years’ time period and are likely to be implemented in January 2021. The gap of six months would provide both the countries sufficient time to have the resolution on the differences over the digital tax that would impact the tech companies from the US.

It is worth mentioning here that France had decided to have 3 per cent tax on the revenues that technology companies earn from selling goods and services to French citizens through the internet. These technology companies do not have substantial physical presences in France, but their activities generate revenues from digital advertising and e-commerce.

Also read: New Hope For An Early Closure Of The UK-Japan Trade Deal

LVMH is not interested in going ahead with the agreement to acquire Tiffany. The French government’s directions discussed above restricted LVMH to meet a contractual timeline of 24 November 2020 to complete the acquisition of Tiffany. Jean-Yves Le Drian, France’s foreign minister, wrote to Arnault stating the need to be a part of France’s endeavour to defend its national interests. This is according to the letter dated 31 August 2020 that LVMH sent to Tiffany and Tiffany published on 9 September 2020.

Jean Jacques Guiony, finance chief at LVMH informed that the acquisition deal could not happen as it is prohibited from closing the deal. There are some reports quoting a source that did not intend to be identified and suggested that Arnault had requested the French government to assist LVMH to pull out of the deal with Tiffany. However, Guiony stated that the letter was uncalled-for and came as a complete surprise to LVMH.

The financial fallout of the coronavirus pandemic has made the deal’s price tag lesser attractive to LVMH. Guiony is reported to have described Tiffany’s recent month’s financial performance as uninspiring. In the three months ended 31 July 2020, Tiffany’s worldwide sales were down almost 29 per cent to stand at $747.1 million. The sales could not meet the estimated targets of $772 million.

This suggested a hazy environment of queries if LVMH was looking for walking away from the scheduled acquisition of Tiffany or wanted to use the hurdles in the deal completion process to renegotiate the price offerings. It is to be noted that so far, Tiffany has resisted any efforts regarding further price negotiations.

Key details of the lawsuit filed by Tiffany against LVMH

Tiffany filed its lawsuit against LVMH in Delaware, the US state in which the New York-based company is registered and compelled it to finish the deal as agreed in 2019. Tiffany mentioned that LVMH was putting off when it was the time to initiate the regulatory approval for the deal in the European Union (EU), Taiwan and Japan. Nonetheless, people who were aware of the LVMH’s plans stated that it planned to file for getting the approval from the EU within days.

Tiffany stressed in the lawsuit that it contested LVMH’s suggestion to pull out of the deal by claiming that the US retailer underwent a material unfavourable effect or breached its obligations under the arrangements of the deal. Tiffany also highlighted that the acquisition deal is any way incoherent with its patriotic obligation as a French company. The US retailer brought into light that the acquisition is necessary to continue the dividend payouts to its shareholders. According to familiar sources, LVMH had asked Tiffany to pause the dividend payouts until the acquisition deal is completed.

Till date the French company has held the deal contract with Tiffany. And Tiffany contended the Delaware court order LVMH to comply with its obligations to either close the deal or pay damages.

There had been an air of doubts as per some industry experts on the acquisition deal of Tiffany by LVMH since past few months. In June 2020, there was a buzz that LVMH was looking at ways to restart the price negotiations with due to the impacts brought in by the coronavirus pandemic. It would be interesting to keep a watch on the developments in the matter as things unfold in coming times.

Several M&A deals have been impacted since the pandemic began

The coronavirus pandemic has impacted several mergers and acquisitions (M&As) deals in recent times. Since the pandemic began, many of these M&A agreements have been reported to have either reached the court of law, were renegotiated or ultimately cancelled. The LVMH-Tiffany acquisition deal is one of the latest deals among other M&As that were agreed before the outbreak of the coronavirus pandemic.

In the retail sector, L Brands Inc, the fashion retailer from the US with well-known brands like Victoria's Secret and Bath & Body Works is reported to have agreed to allow Sycamore Partners, the private equity (PE) company walked away from the $525 million acquisition of a majority stake in its Victoria’s Secret business division. In another deal, Simon Property Group Inc and Taubman Centers Inc are in dispute at the Delaware court as Simon withdrew from the $3.6 billion buyout plan of Taubman. While Simon is a US commercial real estate company, Taubman owns, manages, and leases regional and outlet shopping centres in the US and Asia.

The coronavirus-led economic crisis has constrained finances throughout the world, bringing an unprecedented fall in sales of luxury goods. This slump of sales has severely impacted the manufacturers and retailers in the luxury goods segment. Some estimates suggest that there would be a further drop of around 35 per cent in sales in the industry in 2020 amid the ongoing crisis brought by the pandemic. Many experts point out that the industry might return to the previous year’s revenue levels only by 2022-23. In pre-pandemic times, the industry had witnessed considerable growth for a decade.