How did the Australian businesses perform amid COVID-19 pandemic?

When the pandemic struck Australia along with the whole world, millions of people were forced to work from home. As the shift to work from home may seem easy for some, businesses needed to improve their technology performance both at work and on their servers.

Do read: Coronavirus Takes a Toll on Global Markets

The AlphaBeta research found that some businesses had implemented as much technology alteration since March as they had in the last ten years. Businesses needed to adapt to the novel situation as the pandemic caused many shutdowns.

Due to that, productivity, employment, and sales have been mostly positively affected by the technology resilience.

When thinking about the future, Australian businesses have expressed that the new improved technology would be used even in a post-COVID era because it boosted productivity in the workplace.

However, those businesses that implemented complementary changes, such as social distancing measures or mental health support, have showed a three times larger improvement, rather than any other new change. 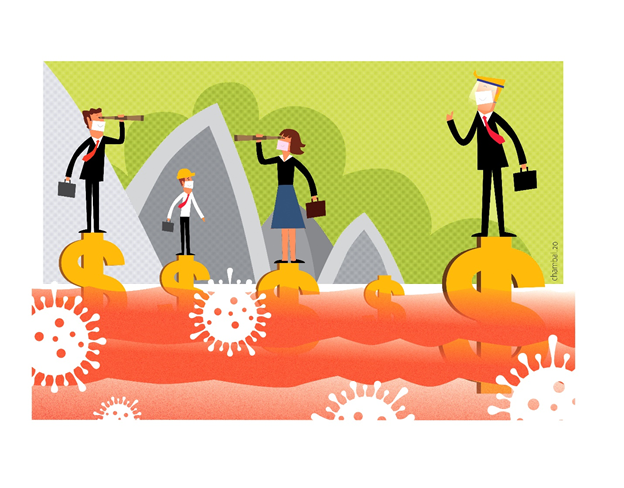 How did Australian businesses adapt to technology changes?

Most companies have improved their way of doing business in the front and back office technologies.

In Australia alone, there was a 17% increase from the latest data in 2018. The current social media activity is estimated to be 65%, while it was 48% back in 2018. The growth in being active on social media is comparable to 3 previous years.

Back office technologies consist of human relations (HR) and stock management process. Businesses have implemented more digital tools in their payroll processes, so the current rate for that is 73% and has jumped from 65%. Online tools for stock control processes have also improved, being at 41% compared to 31% from 2018. Both factors show that they have improved as much as they did in the last 10 years.

Interesting read: How did the economy get affected by the pandemic?

Another thing that Australian businesses started using more are collaboration apps and tools. As people have been urged to work from home, meetings have been held online through videoconferencing apps, which more than 60% of Australian companies have started doing.

Businesses have been implementing 43% more of filesharing and signing documents online were greeted by 27% of Australian enterprises. Apps that are allowing changes to the existent IP address (VPNs) were used by about 22% businesses.

How did the productivity change?

The firms decided to invest their time and money in additional training of their employees, supplying the staff with protective equipment or adopted new measures (such as social distancing), the result of which was seen in the form of big increase in the staff productivity.

Experts have said that these businesses saw the biggest boost in productivity because employees felt more valued. Technological development is always welcome, but there is no such thing as employees feeling more human and valued.

Working from home was welcomed by many people, as they could finally spend more time with their families, cook more home-made meals, do more chores instead of calling cleaning services and similar. Those who still need to go to the offices have shown a big enthusiasm for working from home, as it became ‘a new normal’.

However, after businesses dive in the research a bit more, they will see what is most productive for them money-wise, and decide if business-as-usual would get a new look or get back to what most people were used to.