GE stock jumps 17% on plans to split into three companies

Shares of General Electric Company (NYSE: GE) rose about 17% in the premarket session on Tuesday, hours after it announced plans to split itself into three separate public companies.

The Boston-based conglomerate said it will split into three entities for the aviation, healthcare, and energy businesses, starting 2023.

The company has been grappling with increasing debt since the 2008 financial crisis.

GE said it would merge GE Power, GE Renewable Energy, and GE Digital to create a single company by early 2024. Likewise, it will create a separate public firm for its healthcare business by early 2023, wherein it will hold a 19.9% stake. In addition, it will create an independent company for its aviation business.

Also Read: Are these nine penny stocks worth the penny? 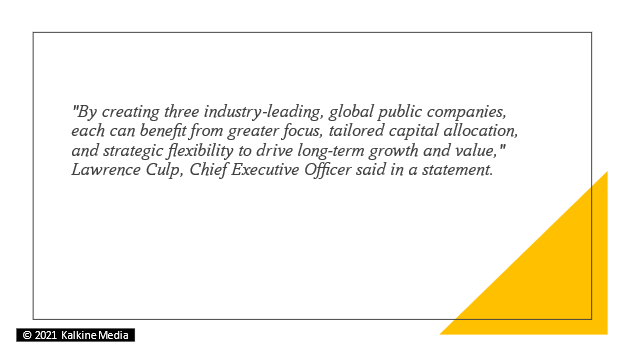 The company has been struggling with heavy debt since 2008. It has already sold some of its businesses, including its appliance segment in 2016 to Haier, and the light and bulb unit in 2020. It also sold the bulk of the GE Capital finance business.

Again in 2018, GE sold assets to reduce its debt burden after a restructuring. In early 2001, it was valued at over US$500 billion. Subsequently, The Dow Jones Industrial Average removed it from the index as its valuation continued to slide. In July this year, it carried out a reverse stock split of 1-for-8 stock split to improve its position.

GE also had interests in the television and radio broadcast business. Founded in 1892, its current market capitalization is about US$119 billion and a P/E ratio of 54.76.

The stock gained over 32% YTD.

GE hopes to improve its financial position after its split into three public companies, which is expected to boost accountability and agility in the respective segments. The company also had set a debt reduction target of over US$75 billion in three years ending in 2021.

Which ASX Companies Are Launching IPO This Week?

Is Songbird Crypto The Next Big Thing In Crypto Market?

Why Are Millions Of Aussies Voting Before Election Day?