Cryptocurrencies seem to be having a blockbuster 2021, having picked up well in the first four months of the year. Understandably, there has been a lot of noise over the digital assets.

Many markets, which were earlier hostile to the idea, have started embracing it. Many industry leaders have issued ringing endorsements in their favour.

The extent to which these virtual currencies have gained significance can be estimated from the fact that world’s largest index provider S&P Dow Jones Indices has started three new indices to exclusively focus on various cryptocurrencies.  The returns on digital assets have dwarfed the returns from stock markets – which experts believe are on steroids due to global liquidity.

Here are the five cryptocurrencies that have given best returns in 2021, till Thursday: 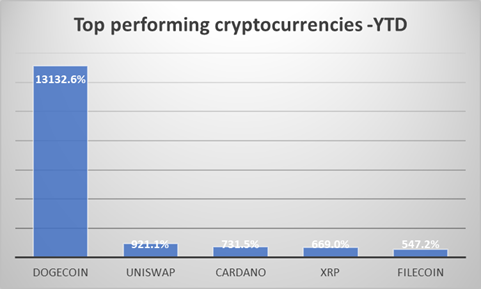 Dogecoin (DOGE): Started as a meme, this cryptocurrency is now valued at US$80 billion. After the public statements by the billionaire Elon Musk of Tesla Inc (NASDAQ:TSLA), batting in favour of the Dogecoin, the digital asset has rallied by an unfathomable 13132.58%. If you had invested US$10,000 into Dogecoin on 31 December 2021, you would have been a millionaire by now – in just four months.

Uniswap (UNI): Named after the company that first developed it, Uniswap is decentralised protocol used to exchange cryptocurrencies. Considered as an Altcoin – an alternative for bitcoin – the digital asset has surged by 921% in four months of calendar year 2021.

Cardano (ADA): An open-source public blockchain platform, Cardano achieves consensus by using the proof of stake. Cardano’s prices in 2020 have surged by 732%.

XRP (XRP): Issued by US-based Ripple Labs as part of its network, the XRP can be used as investment, to exchange other cryptocurrencies or finance transactions on Ripple’s network. The prices of XRP have surged by 669% in four months of 2021.

Filecoin (FIL): A public cryptocurrency and digital payment gateway, Filecoin targets to be a decentralised storage network allowing users to trade unused storage in an open market. The prices of Filecoin have risen 547% in 2021.