Time magazine has named Elon Musk the person of the year for 2021. Mr. Musk is one of the richest men on earth. He has SpaceX and Tesla Inc. to take care of, which sends satellites into orbit and provides electric vehicles to keep the planet climate-friendly, respectively.

While SpaceX seeks to write future space stories, Tesla is the top player in the EV market and has around two-thirds of the EV market. The company’s valuation crossed US$1 trillion recently, and Musk held around US$250 billion in it.

In April 2021, SpaceX won a NASA contract to send US astronauts to the moon after 1972, for the first time. In October, Hertz ordered 100,000 Teslas to add to its fleet, making Tesla part of the trillion-dollar club.

Also Read: Are these 7 utility stocks poised for another year of growth?

Tesla delivered approximately 241,300 vehicles in the last quarter. Its Model 3 was the best-selling vehicle in Europe in September. The company has planned new factories in Texas and Germany to increase production, driven by strong demand for its vehicles. Mr. Musk is selling 10% of his stock after a Twitter poll about paying taxes. 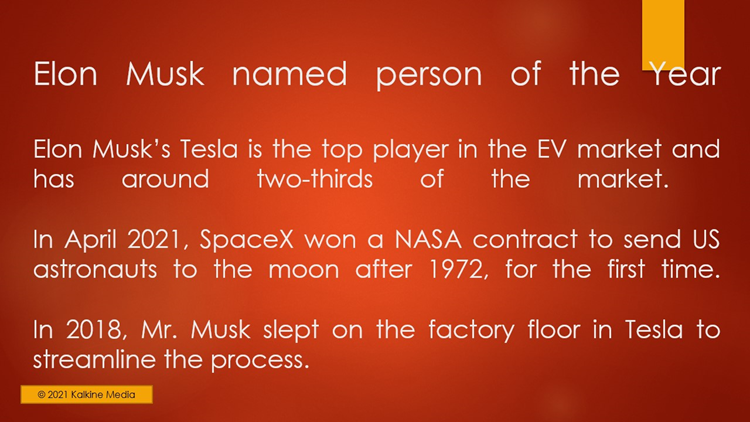 Mr. Musk seems to not keep away from controversies for a long time. His companies faced cases of poor working conditions and of sexual harassment. A federal jury ordered Tesla in October to pay US$137 million for ignoring racial abuse with regards to a complaint of a Black employee in the company.

Feds are also probing its autopilot software in EVs for allegedly being involved in a number of crashes with parked emergency vehicles causing injuries and sometimes deaths.

Aspects of Mr. Musk’s working style has been described by some of his staff in a negative light.

In 2018, Mr. Musk would sleep on the factory floor in an effort to streamline assembly line issues. Mr. Musk has said he wanted to endure the most pain as an example before his staff.

In August 2018, Mr. Musk tweeted about taking the company private for US$420 a share for which the SEC sued him for committing fraud. He then had to leave his position as Tesla’s board’s chair but remained CEO of the company.

In the same year, the Chinese government allowed Musk to open a factory in Shanghai, repealing the law against foreign ownership. Tesla currently makes 50% of its cars in China.

Elon Musk’s mother, Maye Musk, was a model. He was born in 1971 in South Africa. At 12, he wrote a video game code and earned US$500 by selling it to a computer magazine.

He holds a keen interest in cryptos, and his tweets have made some cryptocurrency prices go haywire this year.

In February, Tesla said it invested around US$1.5 billion in Bitcoin. After three months, it announced a U-turn on its crypto policy, saying that the cryptocurrency is not environmentally friendly and damages the environment.

Mr. Musk longtime friend Bill Lee said he’s probably the biggest social influencer ever. Whatever Mr. Musk does or says doesn’t go unnoticed. No wonder Time chose him as the person of the year.