On 15 November 2020, SpaceX Falcon 9 rocket and Crew Dragon spacecraft “Resilience” carrying four astronauts lifted off from the NASA’s Kennedy Space Center in Florida. The launch represents the beginning of a new era of human spaceflight for NASA.

SpaceX Falcon 9 rocket is a two-stage, reusable rocket designed to carry individuals and payloads into the Earth’s orbit.

Who are the four Astronauts on the spacecraft?

Michael S. Hopkins is the Commander on the Crew-1 SpaceX Crew Dragon, Resilience. Michael was selected as an astronaut in 2009 by NASA in 2009. The Missouri native would also serve as the Flight engineer on International Space Station for Expedition 64.

Shannon Walker has a B.A. degree in Physics, an MS, and a PhD in Space Physics (Rice University). Shannon Walker started her career in 1987 with the Space Shuttle Program as a Robotics Flight Controller. In the current space program, she is the mission specialist and would also serve as Flight Engineer on the International Space Station for Expedition 64.

Born in 1965 in Yokohama, Kanagawa, Soichi Noguchi got his B.S. (Aeronautical Engineering) and a PhD in Advanced Interdisciplinary Studies in 2020 from the University of Tokyo. In May 1996, he was picked  by Japan’s National Space Development Agency as an astronaut candidate. Earlier, he was a part of the basic training at Russia’s Gagarin Cosmonaut Training Center for Russian manned space systems in 1998.

In this mission, Soichi Noguchi is the Mission Specialist.

About Falcon 9 and Dragon

Falcon 9 is SpaceX’s two-stage, reusable rocket to carry payloads and people safely into the Earth’s orbit. Falcon 9 is the first orbital class reusable rocket in the world. Being reusable, it enables SpaceX to re-fly the rocket’s most costly parts, which reduces the cost of space access.

The Dragon spacecraft can efficiently carry up to 7 passengers to and from Earth orbit, and beyond. It is the only spacecraft presently flying that can return a considerable amount of cargo to Earth. It is also the first private spacecraft that can take humans to the space station.

What is the mission of Crew-1? 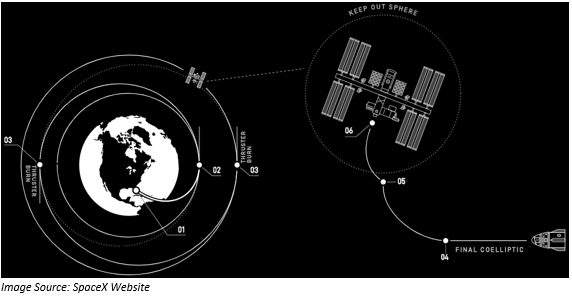 The number in the above diagram reflects various stages in the mission, which is discussed below.

Phasing burns is the third stage in the process where Dragon performs delta-velocity orbit raising maneuvers to get closer to the International space station.

In the fourth stage, Dragon would establish a communication link with the space station and simultaneously performs its final orbit raising delta-velocity burn.

In the fifth phase, Dragon would establish relative navigation to the space station and comes along the docking axis, starting an autonomous methodology.

In the last stage, Dragon would perform the last approach and docks with the space station. Post that there would be pressurisation, hatch open, and crew would ingress.

What is the significance of the mission launch?

The crew-1 mission is the first of six crewed mission by NASA and SpaceX that will function as a portion of the Commercial Crew Program, that aims to make access to space cost-effective. Through this program, the scientist would be able to transport crew and cargo to and from ISS, allowing improved scientific research.

Through this program, it would be possible to lessen the cost of going to space for NASA and would also enable common people to take a trip on a commercial rocket. This launch is considered as the beginning of a new era of space travel.