On a weekly time frame chart, ALFA's prices are consolidating for the past 6 months and trading in a range of GBX 120.00 to GBX 150.49. Prices are trading in a rectangle channel pattern and as per the pattern characteristics, a breakout on either side will provide cues about the short-term trend for the stock. Prices are continuously taking support of 21-period SMA for the past four months, indicating an upside direction for the stock. Volume is consolidating with the price action and at an indecisive stage to indicate future direction. On the lower side, levels of GBX 120 is acting as the major support level for the stock. 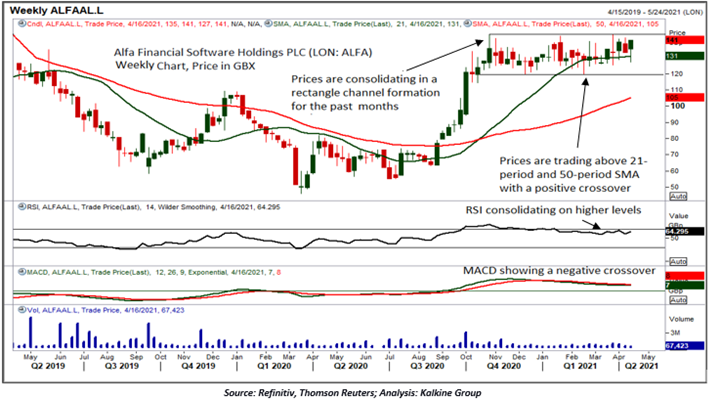 What are the Technical Indicators suggesting?

After analysing the current price action coupled with the technical indicators, Alfa Financial Software Holdings PLC seems to be in a consolidation phase and trading at crucial levels. An upside move from the current level may end the consolidation phase of the stock as the prices are getting support from several technical indicators except for MACD, however, a downside move below the major support level might bring the bears into action.