The Office for the National Statistics (ONS) reported UK job vacancies touched a record high of nearly 1.2 million in September.

The rise came as several sectors are facing staff shortages and are searching for workers to meet the shortfall. The staff shortage has been attributed to the impact of the ongoing pandemic and also Brexit.

The rise in job vacancies, however, comes despite cooling unemployment data in the UK. The discrepancy has been attributed to the shortage of skilled workers.

According to the ONS data, the number of UK workers on payrolls increased by about 207,000 people between August and September.

This led to a record level of 29.2 million people, which was about 120,000 higher than its pre-pandemic levels.

The sharp drop in unemployment figures was due to the furlough scheme ending by the end of September.

London witnessed the sharpest rise in employment but did not reach its pre-pandemic levels, unlike other areas. 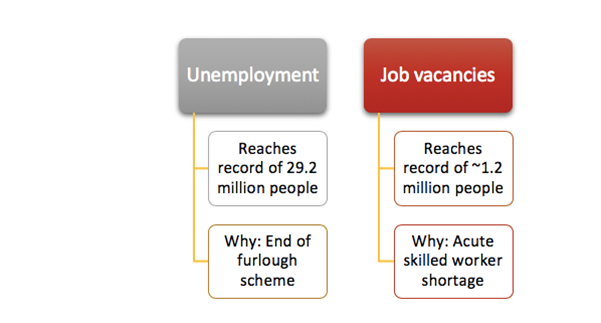 It was also the second consecutive month that the three-month average jumped over the 1 million mark.

The hospitality sector was among one of the most impacted by the shortage, with accommodation and food services activities up the highest, by 59 per cent between July and September.

Vacancies also rose due to demand from shop owners, wholesalers and motor garages and other businesses. Motor garages had job vacancies for 35,000 additional workers.