What led Westpac-MI Leading Index to improve in August versus July?

The Australian economy has started to pick up momentum gradually after it suffered a massive jolt from the coronavirus outbreak.

The 6-month annualised growth rate in the Westpac-MI Leading Index that shows the anticipated pace of economic activity comparative to 3-9 months into the future has shown a rise from -4.42% in July to -2.56% in August. 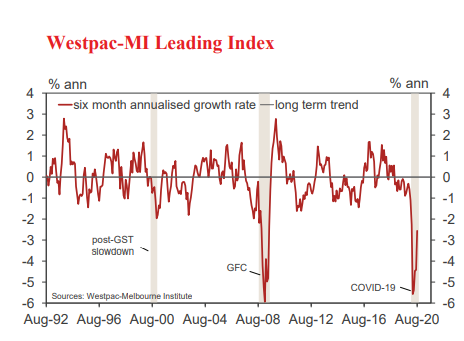 The Westpac-Melbourne Institute Leading Index gauges a range of macroeconomic indicators, from drivers of economic growth to the sentiments bolstering the economic stance of the country.

Bill Evans, Chief Economist of Westpac, stated that the majority of the improvement in August was witnessed in consumer sentiment, unemployment expectations and dwelling approvals.

These indicators have been largely in line with Westpac's projection that the growth rate will be at robust 1.8% for the September quarter amid an estimated 4% reduction in Victoria, which represents about 25% of the national economic activity.

Mr Evans had earlier expected, as mentioned in the Westpac-MI Index for July, that strict lockdown measures due to resurgence of the virus in Victoria could lead to a 9% shrinkage in the economy of Victoria during the September quarter.

DID YOU KNOW? Victoria’s second wave of COVID-19 is pulling down jobs and consumer spending

The July index also showed projections that the growth rate for Australia would be flat in the September quarter before rising by 2.8% in December quarter assuming that Victoria shifts from Stage 4 to Stage 2, while there is no outbreaks in the other states.

However, Westpac forecasts have been more positive than RBA. Last month, RBA had projected the growth rate of Australia for 2H20 at 1.3% compared to Westpac's forecast of 4%. The central bank has also forecasted a much higher unemployment rate of 10% for the end of 2020 compared to Westpac's projection of 7.7%.

The Index growth rate is improving

Mr Evans stated that while the index's growth rate had been progressing from a severe low of -5.61% in April, it was still moving at a pace slower than that witnessed immediately prior to Australia's countrywide lockdown.

In August index, US industrial production, monthly hours worked, and commodity prices were the major components that had been acting as an added drag on the index, down by 0.76 ppts, 0.82 ppts and 0.35 ppts, respectively.

Mr Evans stated that coronavirus induced adverse jolt experienced by Australia in March-April would eventually begin to cycle out of the 6-month growth rate calculation in the months ahead.

The growth rate is expected to shift into positive territory from September onwards as the severe weakness witnessed during March-April steps into the base of the calculation.

According to Westpac’s bulletin dated 9 September, given the new COVID-19 cases in Victoria had slowed down remarkably, and there were no pieces of evidence of a second wave in either NSW or Queensland, consumer sentiment has risen for September by 18%.

DID YOU READ? 5 Steps Australia should take as the business re-opens across Victoria

The Westpac-MI index for consumer sentiment increased from 79.5 in August to 93.8 in September. The 18% increase in the sentiment arrived at the time when official statistics confirmed the news of Australia slipping into its first recession since 1992.

However, the September survey was concluded prior to the declaration of Victorian State Premier Andrews, on 6 September on the reopening to take more time than expected earlier.

The declaration could have resulted in decreased 14.9% rise in confidence in Victoria, but the dissatisfaction that came from expanding the lockdown measures would have been still more than compensated by the state's progress in suppressing the virus.

As per the RBA minutes for the September meeting, there has been some market speculation about a cut in the cash rate from the present 0.25% to 0.1%. Westpac stated that the alternative would stay under consideration, but the economy has no need to exercise the option at present.

ALSO READ: How increased spending support and cash rate at 0.25% would help the Australian economy

The policy measures adopted by the RBA Board persisted in bolstering accommodative financial conditions. The Board noted that the cash rate had been very low at 13 basis points and investors anticipated it to stay at that level for some time, reflecting a large amount of liquidity in the system.

The Reserve Bank of Australia is expected to be concentrating on helping government bond markets, including state and territorial borrowings, as it seeks to foster fiscal stimulus strategies to improve the growth rate of Australia.

GOOD READ: RBA's Projection: What if the Cash Rate stays at 0.25 per cent for 3 years?

The RBA Board is due to meet next on 6 October on the same day when the federal budget will also be announced. Westpac expects an expansionary budget from the Federal authorities on the budget day.