Wetherspoons on Wednesday joined the list of effected firsm as it reported that its Carding and Coors beers are the latest casualty of the supply chain crisis as most pubs are not receiving deliveries. Its brewers, Molson Coors, said that the supply was hit due to driver shortage.

Various high street businesses announced shortage of stock in the UK in the last few weeks. Restaurant chains such as KFC and Nandos are running out of chicken, McDonald’s reported it is running out of milkshakes and bottled drinks.

Over the last week, various businesses reported that they are running short of products due to shortage of heavy goods vehicle (HGV) drivers needed to deliver the products and stocks.

The UK economy is facing such supply chain crisis since 1983. The supply chain problems resurfaced due to strict post-Brexit immigration rules, which made it difficult to hire truck drivers to transport goods. Even Covid-19 restrictions posed hurdles for the supply of goods. 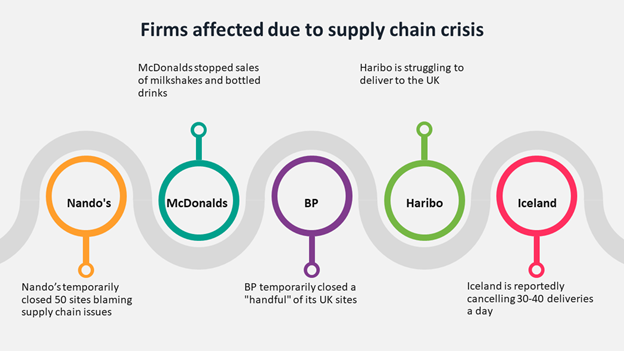 Supermarket suppliers such as Haribo and dairy giant Arla have reported stock shortage and even British oil giant BP reportedly faced shortage of gasoline and diesel, following which it had temporarily close some of its UK sites.

Due to the pandemic, every country is dealing with supply-chain crisis, but it seems to be more serious in the UK. The country is facing crisis of workers as post-Brexit employment regulations have forced many workers to return home.

Businesses in UK are seeking for creative solutions to the crisis, but with the government determined to end the free movement of foreign workers, the problem is not likely to be solved.

According to Road Haulage Association’s (RHA) survey, in August there was shortage of over 100,000 drivers and warned that the situation has reached a crisis point. When the country was part of the single European market, any EU citizen was allowed to work in the country, but after Brexit, many workers was classified as low skilled and restricted to work in the country. It was noted that around 30,000 driving tests did not take place last year due to the pandemic, which posed problems for the serving drivers. The RHA estimated that over 20,000 HGV drivers moved to their home during the Brexit process, which left the UK short of around 90,000 drivers.

ALSO READ: 3 FTSE oil and gas stocks to watch ahead of Storm Ida

Morrisons, UK’s supermarket chain Morrisons is currently training staff to become truck drivers. The Association of Independent Meat suppliers told the BBC that currently the industry have around 14,000 job vacancies but due to lack of interest in meatpacking and truck driving jobs, covid-19 and Brexit, the worker crises emerged on the horizon.

The Confederation of British Industry (CBI) reported that the amount of imported deliveries from suppliers dropped at the fastest rates in history, reflecting disturbance to international trade.

The survey shown supply chain crisis and staff shortage in many other countries such as US, New Zealand and Germany. Last week, Toyota announced that it would reduce its global production by 40% due of shortage of microchips and other components.

The UK has been facing crisis throughout the summer due to so called “Pingdemic”, when the large number of employees being asked to self-isolate after they got a ping from the NHS covid-19 app, as they came into contact with someone tested positive for covid. However the app was modified on 2 August to make it less sensitive.

ALSO READ: What was UK’s Pingdemic chaos all about?

The HIS Markit/ CIPS Composite Purchasing Managers’ Index (PMI) fell from 59.2 in July to 55.3 in August, this was lowest in six months. However, any figure above 50 is consider growth, but the sudden decline led some analysts to worry that the economic recovery from the pandemic is losing momentum, with supply constraints hitting output growth in the manufacturing and service market.

In a letter to the Boris Johnson government, various businesses warned that consumers will suffer unless they intervene and also the staff shortages will affect the supply.

However, a government spokesperson said that the UK government is working in the interest of the country by prioritising the skills we already have while attracting the talent that the economy needs to grow.

He further added that the businesses were too dependent on migrant workers for many years and now businesses should make the jobs more attractive with better opportunities, training and salaries.

The government brought in a package of measures to gear the heavy goods vehicle (HGV) driver shortage, with the effective process for new drivers to gain their HGV license and to enhance the test in the country.