The car production in the UK has fallen by 5% in September as compared with the same month in 2019. This is the worst production number since 1995, according to the Society of Motor Manufacturers and Traders (SMMT). So, breaking it up, car plants produced just 114,732 cars in September, which is 6,000 fewer units than the same month last year mostly due to the pandemic crisis, lockdown restrictions and job losses. In September 2019, the units produced were 120,729.

The ongoing coronavirus pandemic and concerns over no-trade deal Brexit are a few reasons. The economic impacts of these two shocks are building on each other in many sectors. The automobile sector continues to suffer the most with the twin impacts of Brexit-related uncertainty and the pandemic crisis.

According to the latest figures by the Society of Motor Manufacturers and Traders (SMMT) on 29 October, UK’s car production for September fell to its lowest level in the last 25 years. Only 114,732 cars were manufactured, recording a decline of 5 per cent or 6,000 cars in comparison with that of the same period in the previous year.

The export segment was hardest hit, plunging by 9.7 per cent to 87,533 units in September. Around 9,500 fewer vehicles were exported in comparison to 2019, where 96,970 units were exported for the same period. The main reason leading to the decline was shipments to key overseas markets, such as China, the EU and the US. The US exports were hit particularly, dropping by 30 per cent. Whereas exports to China and the EU recorded a downfall of 1.2 per cent and 3.3 per cent, respectively.

However, looking at the positive side, the numbers of cars produced for the UK market rose by 14.5 per cent, or 3,440 vehicles. There was also a surge in the production of battery electric vehicles (BEVs), which grew 37 per on a year-on-year basis. Of which, the majority were exported especially to the EU. An analysis by SMMT depicted how a 10 per cent World Trade Organisation tariff would increase the cost of UK-made electric cars exported to the EU by an average of £2,000 per vehicle.

Below table and chart represent the car produced in the UK in 2020: 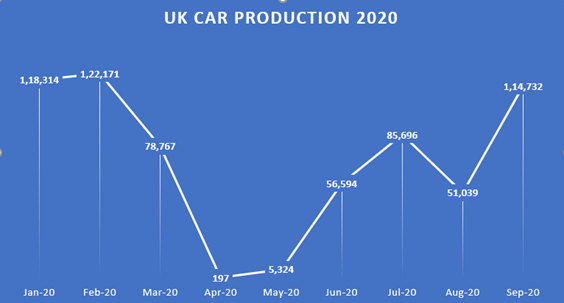 It is estimated that less than 885,000 units are scheduled to be manufactured in 2020. It would be the first time that the UK will be producing less than a million cars a year since 2009, if the prediction holds true.

Even when the UK is looking forward to increase the production of zero emission vehicles, added post-Brexit tariffs would have a negative impact on international investment and may damage industrial competitiveness.

The Q4 2020 looks increasingly challenging with countries across Europe experiencing a surge in Covid-19 cases, with local lockdowns already in place across many parts of the UK.

Here we are discussing one LSE-listed auto company which has seen significant stock performance recently:

Aston Martin has taken another major step forward as Mercedes-Benz AG, its long-term partner, became one of the company's largest shareholders. The company has expanded and signed an enhanced technology agreement with Mercedes-Benz AG, through which it tends to secure access to world-class technologies to support its long-term product expansion plans, which includes electric and hybrid powertrains.

Driven by the Strategic Cooperation Agreement, the company had also updated its strategic and product rollout plans in order to deliver profitable growth and cash generation over the medium-term and paving the way for creating value for its significant shareholders.

The company has also recently made an announcement regarding the successful arrangement of a new fully committed and comprehensive financing package, comprising of £125 million of new ordinary shares (250,000,000 new ordinary shares at 50p per ordinary share), new second lien split coupon notes of £259 million equivalent in aggregate principal amount of 13.5 per cent, which will mature in 2026.

Along with this, detachable warrants incorporated representing 5 per cent of the fully diluted issued share capital of Aston Martin following the proposed Mercedes-Benz AG share issuances, £840 million equivalent of first-lien notes, which is due in 2025 and a refinanced revolving credit facility of £87 million maturing in 2025.

Do Read: Aston Martin Gets A Fresh Lease of Life With £1.3 Billion Of New Investment

The coronavirus crisis has resulted in a shock for the automobile industry disrupting the supply chain and demand. Though the UK has been facing a second spike in the coronavirus cases, it is putting its best foot forward and rebounding from the lockdown lows. However, the Brexit uncertainty is also going to be challenging for both the UK and the EU at least for the auto companies.