The new green bonds were launched just a week before the COP26 climate talks, which the UK is set to host in Glasgow. The retail green savings bonds are expected to remain on sale for a minimum of 3 months.

Moreover, the green savings bond sale comes just a day after the UK issued a second green gilt on Thursday, raising a further £6 billion that would be used to fund green projects.

A green bond is a fixed income financial instrument for retail investors which supports the capital raising and investments requirement of climate-focused projects, while a green gilt is a sovereign issued green bond sold to institutional investors at a fixed rate of return until their expiry.

The Green Savings Bond is being offered by the NS&I at a fixed annual rate of 0.65 per cent and over a 3-year term.

The green savings product will allow savers over 16 years of age to invest into government backed environmentally friendly projects. The new bonds have a minimum investment amount of £100 and a maximum of £100,000. 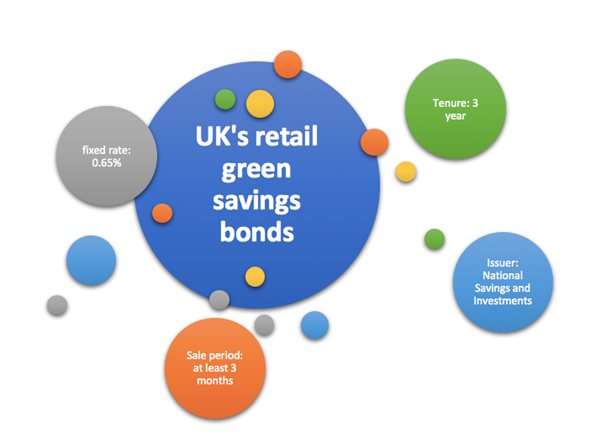 The UK has also issued a total of £16 billion green sovereign bonds since the last month.

The treasury had raised £10 billion in September, which made it the largest green issue made by any country. It was also the largest ever order book for a green bond as it was oversubscribed by 12 times.

The second tranche of the UK treasury’s green gilt issuance came on 21 October, and it raised an additional £6 billion. The green gilts have been issued with the aim of supporting green-focused projects in the country.

The UK’s second green gilt is a 32-year bond and will mature on 31 July 2053, thereby, making it the longest maturity sovereign green gilt in the world.

The recent retail green savings bond and green gilts will thus allow both investors and savers to back UK’s net-zero projects.

Areas that can benefit include the renewable energy sector by backing offshore wind projects, flood defences, decarbonising of the transport sector by investing in net zero-emitting busses and more.

The recent issuance of different types and maturities of green bonds also reflects the UK’s commitment to reach its ambitious goal of becoming net-zero by 2050 and further cement the UK’s position as one of the largest green finance countries in the world.

Can savers benefit from the new retail green savings bond?

While the retail green savings bond is an innovative and new product, the 0.65 per cent rate has come as a disappointment.

The fixed-rate being offered by NS&I is fairly below the rates offered by some of the top fixed-rate savings bond in the market, with fixed rates ranging from 1.45 per cent to 1.81 per cent over a three-year period.

Moreover, with inflation concerns and a possible rate hike around the corner, the rate being offered by the NS&I may negatively impact the attractiveness of this savings bonds for British savers.