The Reserve Bank of Australia (RBA) has released the latest monetary policy minutes for its May meeting. The May monetary policy decision was monumental for the Australian economy as it marked an end to near-zero interest rates. The latest minutes showcase the process behind this rate hike and how the RBA decided on a rate hike margin of 0.25%.

After the May hike, the official cash rate in the economy now stands at 0.35%. The markets had not expected a rate hike of 25 basis points, which meant that the RBA’s latest decision was a major blow to consumer sentiment. However, the recent minutes report highlights that the RBA was even considering a rate hike as high as 40 basis points. If implemented, a 40-basis-point rate hike would have been extremely damaging to the overall market sentiment.

The RBA arrived at this historic decision after considering the rising cost-of-living pressures and the soaring prices faced by consumers. Overall, the Board agreed that the conditions required for a rate hike had been met, with further rate hikes becoming a possibility over subsequent months. Though the RBA has not specified the extent of coming rate hikes, it has stated that interest rates will be reviewed within a relatively short span of time.

ALSO READ: How deep is Australia's rental crisis? Will it have an impact on elections?

Why was the cash rate raised by 25 basis points? 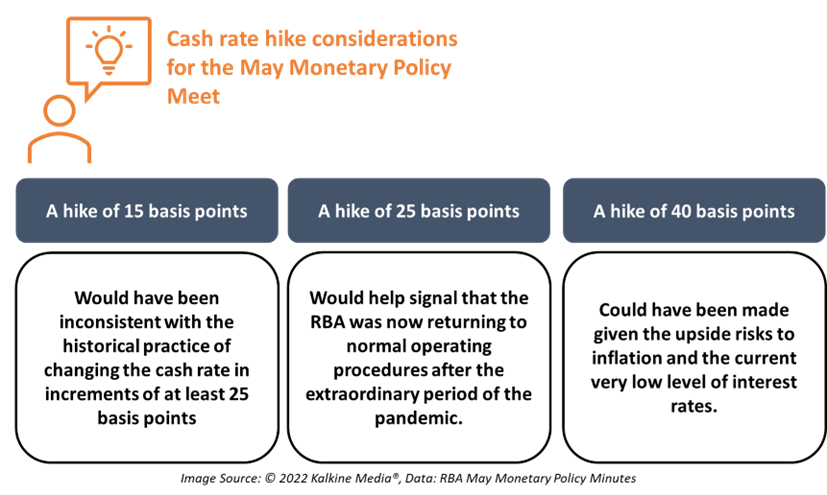 Highlighting the reason for choosing the golden rate of 0.25%, the RBA clarified in the minutes that the other rate hike consideration of 0.15% would have been inconsistent with historic rate hikes. The RBA has maintained a practice of raising interest rates in increments of at least 25 basis points. The size of this rate hike conveyed the intention of the Board to move back to the pre-pandemic conditions.

The RBA also shed light on the reinvestment strategy for bond maturities of the stock bonds purchased by the central bank during the pandemic. The Board had the option to either:

Given these considerations, the Reserve Bank decided to not reinvest the proceeds of maturing government bonds and continue on its path of monetary policy withdrawal.

ALSO READ: Why has wage hike become a hot topic ahead of Australian election?

Inflation has clouded the economic outlook for not just the Australian economy but also in the larger global context. Upstream price pressures are quickly reaching consumers in the form of rising prices, with supply-side snags and demand increasing in the backdrop. The sharp uptick in demand seen over the last few months has made businesses more confident that price hikes will not significantly impact their sales.

Additionally, labour market conditions have strengthened since the start of the year and are at their tightest in many years. The unemployment rate had declined over the first quarter of this year and now remains steady. This labour market momentum is likely to continue throughout this year. The demand for labour has also increased amid a low unemployment rate, increasing the prospects for wage hikes.

Some key forecasts by the central bank include:

The upcoming wage data is likely to stir the pot for future rate hikes, showing whether RBA would be aggressive in its upcoming stance on interest rates. The apex bank has hinted that rising price pressures could transform into tighter monetary policy conditions.

DO NOT MISS: How do US inflation figures impact Australians?