Is hydroponics the solution to rising food demand?

The idea of hydroponics is not new; however, the technique is gaining traction due to ever-increasing demand for food and declining cultivable land area.

Hydroponics is simply a farming technique that utilises water instead of soil. Popularly known as soilless farming, plants grown in a hydroponics system get their nutrients from the solution added to water. This revolutionary technique allows growers to grow food anywhere globally and earn higher benefits with fewer sources.

Why hydroponic farming? The rationale of the technique

We are very well acquainted with a sharp rise in the global population. According to the United Nations, the world’s population could reach 9.7 billion in 2050 and max out at nearly 11 billion around 2100.

To feed the larger global population, food production must increase by 70%, that too with limited resources and problems of climate change. Hydroponics is a great alternative to current farming practices and will become a primary source of fruits and vegetables in the future. 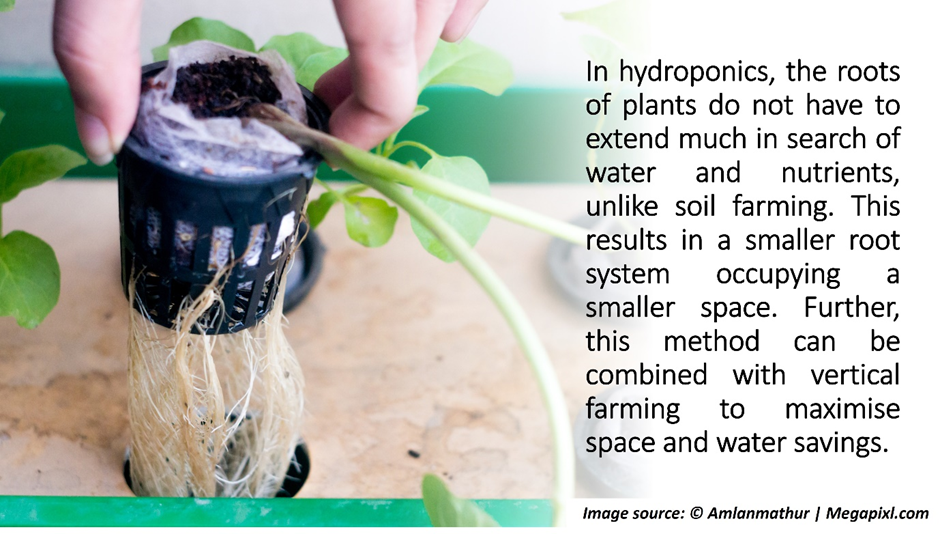 It may sound befuddling, but hydroponics saves water compared to growing plants in soil. This system recirculates water where plants take only the required amount, and the rest is returned to the system.

Saving water is very important in today’s world as it is getting scarce day by day. According to a World Health Organisation (WHO) report, more than two billion people live in water-stress regions. Climate change and population growth are thought to worsen this situation in the future.

Hydroponics creates an ideal set-up for providing nutrients to plants. Plants take up liquid solutions more efficiently, which results in higher production. Additionally, insect and pest incidents are also negligible, which is an added advantage.

As the use of soil is precluded in hydroponics, plants can be grown in any geographical region regardless of the soil type preferred by a plant. Farmers can grow whatever crops they want, according to their interests and market demand.

As it requires less space, hydroponics greenhouses can even be built in urban neighborhoods where traditional farming is impossible. The produce can be immediately sold to markets, saving the time and cost of transportation and packaging.

Drawbacks of the system

Setting up a hydroponics system is more expensive than a traditional farm set-up. Further, it needs skilled human resources to initially install the system.

Different components like artificial lights, aerators, water pumps, fans, etc., are needed in hydroponics systems, making them heavily dependent on electricity. In case, there is a power shortage; it will affect the functioning of the whole system.

As water is circulated throughout the whole system, chances of the spread of waterborne diseases are considerably higher.

To sum up, hydroponics can be utilised in any geography for food production. It is a great way to get more food production in lesser space and holds potential for solving food problems in the future.

What is vertical farming? Advantages & Innovations