The International Monetary Fund has cautioned that the global economic recovery could be losing momentum with resurging infection rate in many nations.

In a new report for major G20 countries, IMF highlighted the uneven aspect of the world economic recovery. It said that the coronavirus crisis is likely to leave deep and unequal scars.

Kristalina Georgieva, Managing Director, IMF hailed the undergoing progress for developing a coronavirus vaccine. But the path to recovery was tough and prone to setbacks, she exclaimed.

She also pointed out that the asset prices were elevated and seemed disconnected with the real economy. It could be a potential threat to global financial stability in times to come, she emphasised. Further, higher debt levels could make future investments tougher to come by.

In October, IMF had released its economic growth forecasts. It said that the global economy would contract by 4.4 per cent in 2020, while it would grow by 5.2 per cent in 2021.

Since then, the outlook for many developing nations has worsened. On the other hand, US and many other advanced economies have reported a stronger than expected growth in Q3. Nonetheless, the fund forecasted that except for China, the economic output for the next year would remain below the 2019 levels for most nations.

Poverty and inequality were on the rise, despite a global fiscal spend worth $12 trillion, warned the international body. This was indicative of an even larger support system requirement, suggested IMF. 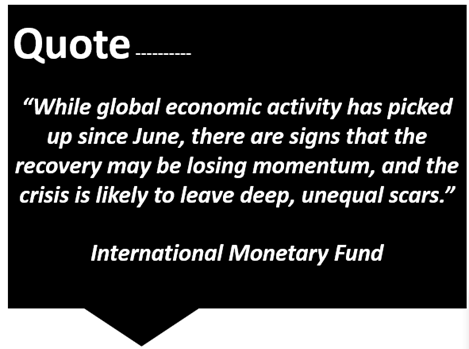 The Fund has been repeatedly urging nations and central banks not to withdraw their policy support prematurely. Lifelines such as job support schemes should not be cut off abruptly at any cost, it added.

In fact, taking away the government support immediately is the biggest risk being faced by many nations in the short term, said Neal Shearing, group chief economist, Capital Economics. It could be self-defeating, he added.

Till the time overall demand comes back to normal levels, the fiscal support must continue, suggest economists.

IMF noted that many nations experiencing a second wave have put in place stricter social distancing restrictions.  While these are not as stringent as the earlier lockdowns at most places, they are enough to derail the growth momentum recently attainted in the third quarter of this year, noted the fund.

Some of the nations that have put in place new curbs on movement of people to contain the virus infections are Australia, France, Germany, the UK, and the US. Their national growth would slow down further if healthcare restrictions are extended for a longer period, informed IMF.

In a separate report, the Bloomberg Economics Index showed that the economic activity has started to shrink again since mid-October in major economies across the world, especially Europe. Renewed set of tighter restrictions is the primary reason for this drop.

The pandemic has forced the global economy into the worse recession since the 1930s. More than 56 million people have been affected by the virus till now with 1.3 million deaths, according to data from the Johns Hopkins University.

With the recent vaccine updates from Pfizer and Moderna, there seems to be light at the end of the tunnel. Stocks of companies most affected by the pandemic like aviation, hospitality, and tourism soared instantly with the news.

If a vaccine is available for mass usage by the first half of next year, the end of 2021 could see global growth to return to the pre-pandemic times, explain market experts. They however caution that simply having a successful immunisation program may not be an instant remedy. Overall recovery with a rise in demand might take a bit longer than a year.

Once the fear of getting infected completely goes away, people would move freely as before, and business activity will soar. Right now, people are voluntarily undertaking social distancing that has pulled down growth, lament market experts.

Synchronized infrastructure investments would be needed once the virus is under check with mass availability of a vaccine, opined the global fund. A collective effort would save on the total funding requirement for the global economic upheaval, it explained.

The IMF chief has called upon the G20 leaders to commit a higher investment in green technologies. It has the potential to boost the global gross domestic product or GDP and create millions of jobs.

G20 nations should act collectively and provide financial support, spreading the vaccine to every corner of the world, she added. Recovery could only be sustained if the pandemic gets defeated throughout the world.