The Intergovernmental Panel on Climate Change (IPCC), the UK Committee on Climate Change, and other international environmental groups have made it clear that there are just 10 years left to take action to keep global warming below 1.5 degrees Celsius until 2050.

For that to happen, emissions, which are pretty high in the UK, have to come down drastically. According to data from the BEIS 2018 Greenhouse Gas Emissions report by the UK government’s Department of Business, Energy and Industrial Strategy, net carbon emission was estimated at 364.1 million tonnes (mt) in 2018, 2.4 per cent lower than the 2017 figure of 373.2 mt. CO2 accounts for 81 per cent of UK’s total greenhouse gas emissions.

The good news is that many UK industries, including transport, real estate and agriculture, have come forward with their own commitments to emission reduction.

As per the BEIS 2018 Greenhouse Gas Emissions (GHG) report, the break-up of the GHG emissions per sector for the UK: 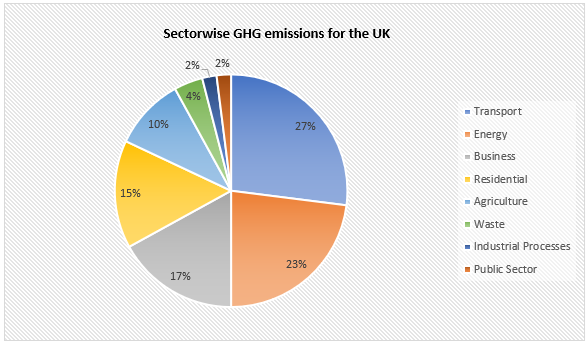 Among the many sectors that contribute to emissions in the UK is agriculture. For the country, the agriculture sector currently represents 10% of total emissions, according to the BEIS 2018 Greenhouse Gas Emissions report.

Though the number is not too huge, the emission management of this sector has been a challenge. For example, agricultural emissions have not significantly decreased since 2009, added the report. Producing crops and raising livestock create greenhouse gas emissions. While these emissions can be brought down, expecting zero emission would mean halting food production entirely.

The farming and agricultural sector produces three main greenhouse gases: methane from livestock, nitrous oxide from fertilizers, carbon dioxide from the electricity that is used on the farms and fuels from tractors and other vehicles.

Now, how does one reduce greenhouse gas emission in the agriculture sector.

According to a report, Let nature help: How nature’s recovery is essential for tackling the climate crisis, published by The Wildlife Trusts, a people’s movement in the UK, in June 2020, the UK can bring down its CO2 and greenhouse gas emissions by 134.7 million tonnes, which is 37% of its mitigation target, if it can restore degraded ecosystems, like grasslands and wetlands.

Agricultural systems basically cycle subsisting carbon between plants, creatures and the atmosphere.  Almost 40% of the UK’s total land is covered by vast grasslands, which can provide a suite of ecosystem goods and services. Similarly, restored wetlands can offer rich habitats and clean water naturally, which are crucial to revert climate change.

A survey conducted by the Intergovernmental Panel on Climate Change has shown that over 2 billion tonnes of carbon is stored deep under the UK’s grasslands, and can play a vital role in curbing climate change.  Due to decades of intensive grassland farming across the UK and high usage of fertilizers and extensive livestock grazing, soil carbon stocks present in grasslands have severely declined.

Experts have said that the grasslands, and woodlands can store two billion tonnes and one billion tonnes of carbon, respectively, and refill the carbon stocks if properly maintained and used wisely.  Also, based on land-use scenarios in the UK and trends in the agriculture sector, the Committee on Climate Change of UK predicted in 2018 that a 64% reduction in agriculture, land use and peatland emissions from 58 MtCO2e (Metric tonne carbon dioxide equivalent) in 2017 to 21MtCO2e in 2050 is feasible.

To sum up, restoring grasslands, forests, planting more trees and allowing natural regeneration can lock up more carbon in the soil, which would be one of the most cost-effective and nature-based solutions to revert climate change. For the agriculture sector to counter global warming and climate change, the policymakers have to both take solid action against carbon emissions and promote carbon storage projects.