The pandemic has brought along many shocks to the Australian economy, all at once. Severe impacts have been felt in the labour market, property market as well as in the economic stability of the country. This was followed by stringent policy action by the government and the RBA, which included lowering of interest rates to near-zero levels and providing fiscal aid by maintaining a budget deficit.

While these policy moves have provided some sort of cushion to the nation’s economy, restrictions placed on international travel wreaked havoc in the Australian property market. With migration falling severely, property markets experienced insufficient demand that could not meet the supply. This led to a drop in property rates in many areas.

However, the past few weeks have been quite favourable, with recovery seen across various economic indicators, including jobless rate and property prices. Reserve Bank of Australia’s (RBA) unemployment forecast for December 2020, which was earlier set at 10%, improved to 8% lately. Besides, property rates also improved in regional cities. As people migrated away from the main cities due to the provision of working from home, property demand in regional areas improved.

The stability of the financial sector seems to be working as a foundation block for the nation’s economic recovery. Moreover, strong monetary policy measures coupled with fiscal aids are lending a helping hand to the rate of recovery. However, the long-term effects of these measures would only be known in a few years’ time.

The virus-induced slowdown in production has led to an increase in unemployment across Australia. The nation’s unemployment rate stood at 6.9% in September, as per the latest data from the Australian Bureau of Statistics (ABS). The closing of borders and a subsequent decline in the aggregate demand stimulated losses across businesses, encouraging firms to cut their costs by reducing employee base.

The prevailing levels of high unemployment are likely to keep the wages and prices restrained. This can be understood by the working of demand-supply forces in the labour market. As unemployment rises, the supply of labour exceeds the demand for labour by the firms. Therefore, the price of labour, i.e. wages, fall. This puts a downwards pressure on prices, as lower input costs for firms means lower prices of the finished goods.

With job creation at the heart of recent RBA policies, the unemployment rate is expected to show improvements, and the full effects of this recovery are expected to be observed in the economy by 2022.

It is worth noting that while the unemployment rate rose considerably from March 2020 to July 2020, it has improved a bit thereafter, as shown in the figure below: 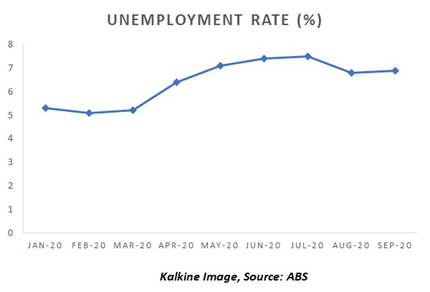 If there is not another outbreak of the virus, the unemployment rate and wages are expected to keep on improving.

The property market has been divided by price variations in cities. As people have migrated from main cities to regional areas, the demand for property has skewed towards the regional cities. Vacancy rates have increased, and further rises are expected amidst the provision of work-from-home made available to the employees.

For instance, the NSW (New South Wales) property market has seen a varied impact of a changing economy under the pandemic. There is a steep increase in house prices in regional NSW due to increased demand for property. Consequently, many locals in these areas had to shift elsewhere as they could no longer afford the rental prices.

In contrast to this, across the far-west side of NSW, the property is being offered for as low as $150. The capital cities of Sydney and Melbourne have also seen price dips. Both these cities have recorded higher vacancy rates than the regional cities.

Severe Blow to the Risk Appetite

The pandemic is expected to forever change the risk threshold amongst the masses. This is true not just for Australia but for the entire world. As markets went on a perpetual decline since March, the consumers became more cautious with each passing month.

However, an improvement in major economic indicators might help improve the expectations of people. But there is still uncertainty as to how much of those improved expectations would translate into an increased appetite for risk of the individuals.

It is important to note that the pandemic has made individuals more risk-averse. With a looming uncertainty, consumers would want to save rather than spend in the current period. Thus, it is natural for most individuals to avoid borrowing or starting new business ventures.

Even with historically low borrowing rates, people would now give a second thought to diving into a new venture. However, for an economy to grow, there needs to be a certain appetite for risk among the masses. Riskier borrowings have higher returns associated with them; thus, it becomes important to avoid a situation where the entire population is risk-averse.

Future Prospects of a Changing Economy

The nature of the virus and the consequent safety measures are both new to the entire world. These measures took their time to get adjusted into the daily life of individuals. However, digital platforms have enabled many aspects of the economy to keep on functioning despite a halt in overall economic growth.

If it were not for these measures, the economy would not have shown recovery in such a short span of time, and unemployment rates would have increased further.

There have also been changes to the course of action taken by RBA. Earlier the RBA seems to be relying on forecasts for policy intervention. But amidst pandemic-induced uncertainty, forecasts have become somewhat invalid. Consequently, RBA appears to be focusing on actual values rather than on forecasted ones.

A major change in RBA’s course of action can also be observed in the weightage given to low interest rates. The RBA took the bold decision to lower interest rates to near-zero levels (currently at 0.1%). This is expected to increase spending in the economy and inject more amount of money. Such a strategy would not have been implemented if it were not for the pandemic. RBA has also started giving more importance to the quantity of money rather than to the price level in the economy.

These changes are yet to get fully realized, and the long-term results would give a better picture of how these policies have worked for the Australian economy. The risk associated with adopting new strategies might just be the cause of unprecedented economic growth in a stressful time.