Consumer confidence is one of the most powerful economic indicators that influences the equity market. When there is high consumer confidence, people tend to purchase more and spending increases. Thus, there is an overall positive sentiment in the market, and stock prices rise.

However, when consumer confidence is low, people tend to save more, and economic growth slows down. Consequently, investors lose confidence, and the stock market plummets. Such a situation can be witnessed in the case of a recession or during global health emergencies like COVID-19.

It is imperative to note that there is a high level of linkage between consumer confidence and consumer spending. However, economic shocks can cause a divergence between the two indicators.

There are various measures of consumer confidence used worldwide. These can be listed as follows:

Can Consumer Confidence be Accurately Measured?

Measuring consumer confidence is like predicting the trail of thought of the consumers based on certain questions answered by them. It is difficult to make an accurate prediction based on just survey answers. This can especially be hampered by unexpected shocks, which tend to change consumer views and confidence over a short span of time, leaving previous measurements invalid.

Tastes and preferences as well as expectations about the future, vary across the surveyed demographic. Thus, it is difficult to bring out an ideal individual who can be labelled as an “average consumer”.

It is also important to note that the survey questions include the consumer perception about policy changes that have already taken place. This means that there is a lagged response from the consumers because their reaction is being observed after the policy in question has been implemented. Thus, various consumer confidence indicators are considered to be “lagging indicators”.

However, it is important to note that measures of consumer confidence are not completely deemed invalid because of these reasons. There are various improvement points that may help bolster the accuracy of these measures, like proper framing of questions coupled with correct timing of surveys.

A Santa Claus Rally is a persistent increase in the stock market during the last week of December due to a usual positive sentiment among the consumers. The rallying of stocks between Christmas and New Year is termed as a ‘Santa Claus Rally’. 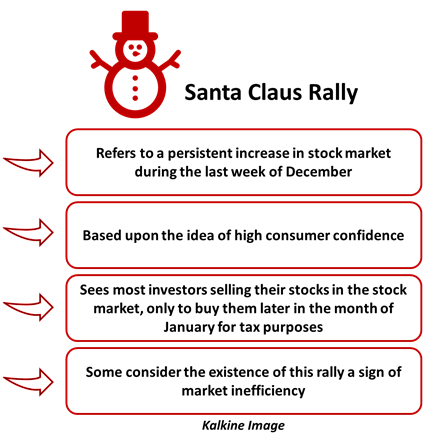 There are various reasons due to which consumer confidence is expected to be high during the last week of December. These include a greater supply of liquidity in the market due to the festive season, tax considerations, and the absence of bearish investors in the market due to holidays.

The period of a Santa Claus Rally sees most investors selling their stocks in the stock market, only to buy them later in the month of January for tax purposes. This is termed as the ‘January effect’.

Experts consider the existence of Santa Claus Rally as market inefficiency. This is because even when investors are aware of its potential occurrence, it does not stop the rally from taking place. Therefore, it is believed to be a sign of market inefficiency.

Economic Indicators Building Up to a Stock Market Rally

Various economic indicators like economic growth, interest rates, the effect of economic policies, the stability of related markets and consumer confidence/expectations contribute towards changes in the stock market.

The stock market can also be affected by the prices in related markets. These markets include the markets for government bonds or commodities. If these markets seem unfavourable to investors, they are likely to only invest in stock markets, thus rallying the market.

And finally, consumer confidence goes a long way in explaining the rallying prices. Higher confidence in the stock market can influence a large number of investors to enter into the market. Thus, driving stock prices higher. Undeniably, the Santa Claus Rally is one of the prime examples of how consumer confidence can strengthen the market in a short time frame.