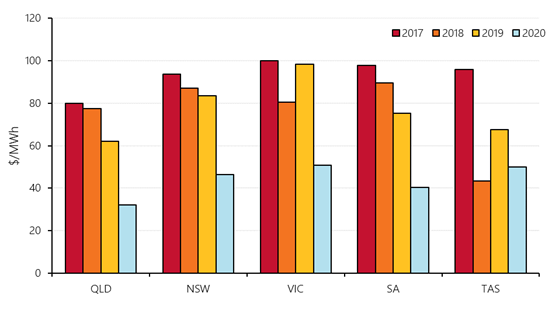 The prices in the National Electricity Market (NEM) dropped to the lowest levels since 2014, recording a decline of up to 48% against the corresponding period last year.

The report highlighted that the NEM‑average operational demand during the September 2020 quarter slumped by almost 313 megawatts (MW), registering a 1.4% decline against the previous year.

The major factors impacting the prices are-

Also Read: The Future of Energy Generation in Australia; Solar to Increase Three-Fold By 2024

The Australian government remains committed to ensuring that the benefit of the declining energy cost is passed on to the end-users. The much-discussed Big Stick Legislation will ensure that the objective is met.

AEMO also highlighted that the energy demand was adversely impacted due to the COVID-19 restrictions, especially in Victoria. Furthermore, the report confirmed the findings by the Clean Energy Regulator of observing a record increase in the domestic solar power during the pandemic.