Soybean crush demand and exports in the U.S. were at record high levels in the first five months of the 2020/21 year. The United States Department of Agriculture (USDA) forecasted a record Brazilian soybean crop at 134 million tons, up by 1 million from the previous forecast. The CBOT soybean price rally was supported by strong U.S. January exports of ~324 million bushels due to limited Brazilian supplies that further reduced the available domestic supply. The U.S. soybean exports have totaled 1.82 billion bushels and already exceeded last year’s total exports of 1.68 billion bushels.

The details of the world’s soybean import, export, and crush data are as provided below:

CBOT soybean price has witnessed a sharp rally from the low of USD 1,042 made in November 2020 to the recent multi-year high of USD 1,456 1/4 level (on 1 April 2021), a gain of ~40 percent in five months. Looking at the current chart structure, it is clear that the prices have been moving in the rectangle channel formation for the past 4 months  and trading in the range of USD 1,303-1,456.

The price is trending in a strong upward trajectory, forming series of higher top and higher bottoms formations which indicate bulls are in action. The prices are trading above the upward sloping trendline support level of USD 1,372 (black color line in the above chart) and continuously taking support of it. Besides, the price is trading above its 100-period SMA, acting as a crucial support zone at the lower end of the channel pattern. The momentum oscillator RSI (14-period) is trading at ~56 levels, indicating a neutral to a positive trend for the commodity. 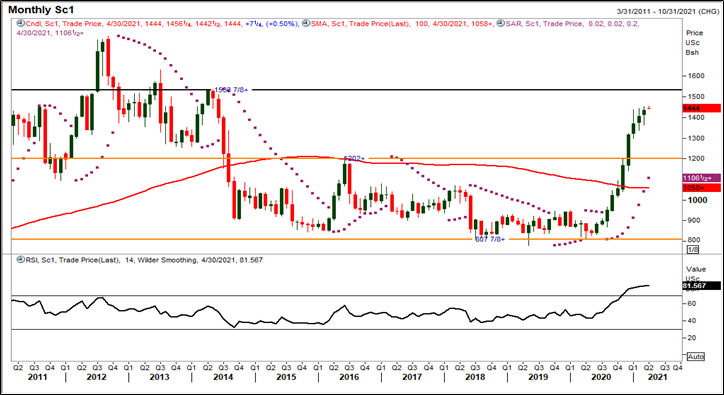 On the monthly chart, CBOT soybean price has broken out of a multi-year rectangle channel pattern at USD 1,202 level on 18 December 2020, after that the price has touched a 7-year high of USD 1,456 1/4 level. Currently, the prices are trading above the upper band of the channel pattern. The bulls are expected to dominate the direction till the time price sustains above the major support of USD 1,202.

The price is well placed above its Parabolic SAR indicator and appears supportive for the uptrend. Prices are trading above the 100-period SMA, which acts as a crucial support zone for the commodity. However, the momentum oscillator RSI (14-period) is in the overbought zone at ~82 levels, indicating that a correction from here may drift the price lower towards the support zone.

The charts suggest that CBOT Soybean price is in a bullish momentum and currently, prices are consolidating on the higher levels. Based on the current fundamental and technical outlook, the market participants would be closely tracking to check if the price can sustain above the support levels or breaks the crucial resistance levels in the coming weeks.