Crude oil prices tumbled by more than 2% on Tuesday due to lower energy demand in China amid prolonged COVID-19 related lockdowns. However, the oil prices rose at the start of Asian trade on Wednesday following the release of industry data showing drawdowns in U.S. crude and fuel stockpiles, raising supply concerns.

During the start of the week, crude oil prices tumbled after China published its factory activity data on Saturday stating that the country’s economy contracted for a second month to its lowest since February 2020 because of COVID-19 lockdowns.

Talking about last week, the prices of both crude oil benchmarks rose more than 3% as China’s central bank said that it will pump the country's monetary policy to support the economy which would ultimately boost oil demand. 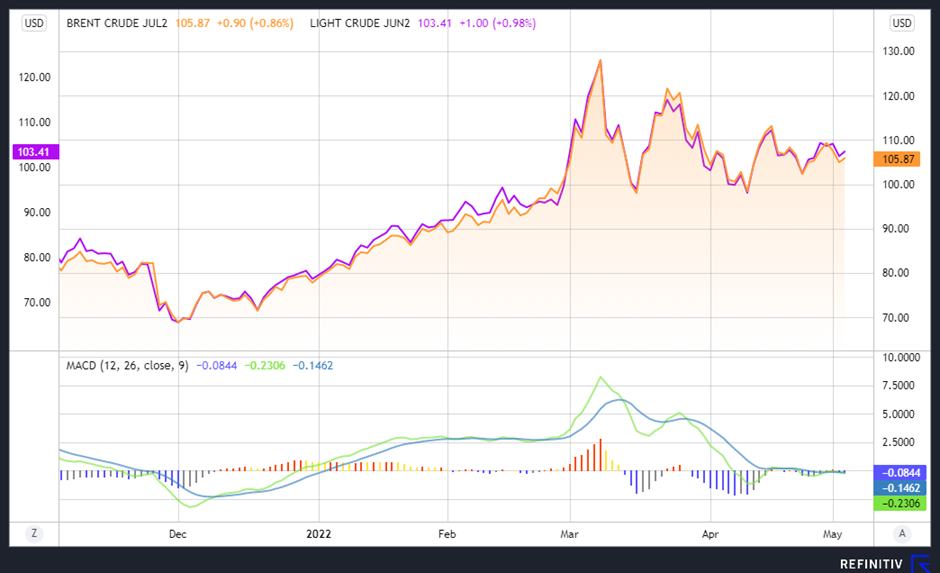 The play between China’s rising coronavirus cases and lower stockpiles

Today’s gain in crude oil prices came after the news that the European Union is drafting a set of new sanctions against Russia for waging war on Ukraine, targeting Russia's oil industry.

Additionally, a report published by the American Petroleum Institute stated that crude stocks fell by 3.5 million barrels for the week ended 29 April. The falling crude stockpiles have raised future supply concerns among investors.

Moreover, Beijing reported dozens of new coronavirus cases daily in an outbreak that has entered its second week. The region is mass-testing residents to prevent a lockdown similar to Shanghai's over the past month.

Various venues including restaurants were closed in the city and streets were silent on Tuesday during a five-day Labour Day holiday.

China's calm demand is a real concern, investors are wondering whether it will pick up in 2022 or not.

The prices of both crude oil benchmarks have been on a wild rally but rising coronavirus cases in China have stalled the bull run amid dampen demand.