LNG in a Hive of Activity, Contango as Winter demand Beckons

As the LNG market prepares for a major contraction in the yearly levels during 2020, the industry players have been proactive enough to manage the supply cuts, which followed the major demand destruction disrupting the LNG trade.

The LNG prices on the back of supply cut and demand destruction, especially from the largest LNG markets led to the downfall of the LNG price to the record low levels. The Asian benchmark, the Japanese Korean Marker traded around US$3 per MMBTU on 14 August 2020, more than 40% since the beginning of the years and is less than a quarter of the gas prices only 2 years ago. 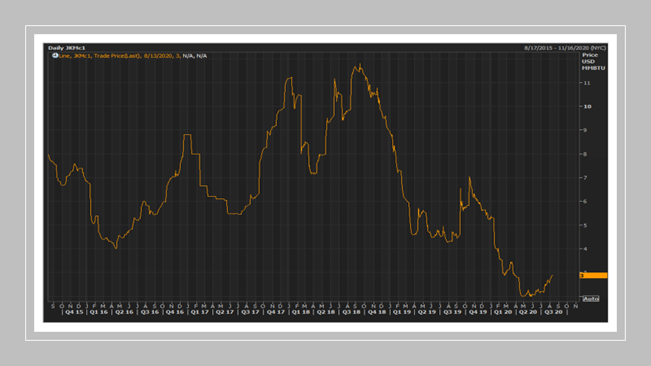 Will the Morrison government rescue the Australian LNG players?

The advisory board by the Australian prime minister is currently strategising to plan support measures for the natural gas sector through government aids or subsidies. Various LNG players had been reaching out to the Australian government seeking assistance on new pipeline developments and guaranteed offtake agreements.

The Australian government aids might come in terms of supply contracts for the gas fired power plants and the petrochemical plants producing chemicals and fertilisers.

Must Read: China-AU: Demand for Australian Resources is Still High

While there are no official remarks from the government, it has been reported that the National COVID-19 commission Advisory Board, which was set up to focus on initiatives to curb the effects of the pandemic for a speedy and robust recovery has apparently advised in favour of the domestic gas industry.

LNG exports flattening, will the upcoming Winters shoot up the demand in Asian markets

While the impacts of the coronavirus pandemic cannot be denied, the exports levels have shown some extent of resilience. Liquified natural gas is a commodity involved in mega trade volumes, the commodity is usually traded in fixed term contracts with some of them at fixed prices. The sales contracts allow the end user chemicals, petrochemicals and heating industries to procure the LNG at fixed prices for a long time as a hedge to the high price such as in 2018 when the LNG prices traded well over US$11 per MMBTU levels.

Read Here: LNG Export to Stagnate Over the Long-Run Amidst Sizeable Global Trade

Though the depleted heating demand in Asia during winter could be the reason for the escalated oversupply situation. Although, as per the latest Australian resources and energy quarterly, LNG export volumes are set to increase during 2019-20 to 79 million tonnes, registering an increase of 4.3 million tonnes against the previous year. Despite the anticipated increase in volumes, the report does not shy away to forecast that the export value would reduce by almost 4.6% to AU$47 billion in 2019-20.

The reduced LNG prices enable some heating demand to surge with the gas taking a bite out of the thermal coal for heating purposes.

The US EIA anticipates a growth in the natural gas with the winter demand beckoning in the Asian markets. Last year the Asian markets witnessed a warmer than normal wiping off a major pie of the heating demand. With the supply cut by LNG players in place, the LNG prices are set to traverse the recovery of the crude oil upon the signals of revival. The US EIA anticipates a long-term steady recovery over fall and winter months and further extending the restoration of the commodity price till the end of 2021.

Another emerging trend as a result of the contango situation is the turning of LNG in storage onboard tankers are already on a high. The tankers plan to play as a quick solution to sudden seasonal demands during the winter months.

While the winter demand anticipation is yet to show a major effect on the spot prices, a surging future price for the LNG is anticipated for the delivery months of winter.

Must Read: LNG Market Overview and Responses Amidst COVID-19

The weak LNG prices have led the LNG major to wear up major sums in write downs as the impact of the pandemic affect economy assesses the impact on the LNG investments. The recent write down accounts for more than US$13 billion on the Australian LNG assets.

Total SA, the French O&G major who holds a significant stake in the Ichthys and the Gladstone LNG project operated by Santos, announced an AU$1.1 billion short-term impairments. As for the publicly traded ASX firms,

Woodside Petroleum Limited (ASX:WPL) which holds 6% of the global LNG supply and is also the largest LNG exporter from Australia, had earlier announced impairment charges and onerous contract provisions of AU$4.37 billion. While the major also added that approximately 80% of the oil and gas properties incurred impairment losses due to substantial and sudden reduction in the prices till 2025.

Must Read: Chevron to Offload its Stake in NWS JV; Market Sees Woodside a Potential Buyer

Origin Energy Ltd (ASX:ORG), power and gas supplier, announced a write down of around AU$1.2 billion for the FY20. Origin plans to under the hit to position it well across energy retail, power generation and natural gas segments to generate strong cash flow to pursue future growth opportunities.

Although the LNG market took a hit during the year, the current juncture holds more positive opportunities, especially related to the winter demand than the threats to the business stream. A co-ordinated supply control complemented by the possible federal government aids and subsidies will play a crucial role in the stable and efficient recovery of LNG prices during the upcoming future.