So far, Commodity markets have been volatile in May. The prices of most of the commodities ended in green until last week. Tight supplies coupled with easing of COVID-19 restrictions in Shanghai, has provided some optimism bringing back commodities into the green zone.

Most of the commodities had tumbled during the first week of May, while energy commodities including crude oil and natural gas logged staggering weekly gains of more than 5.5% and 8.5% respectively. European Union's plan to dodge Russian oil imports had created future supply concerns among investors, lifting the futures. However, the unequivocal behaviour of the EU members on the Russian oil ban had weighed down the oil prices in the second week. 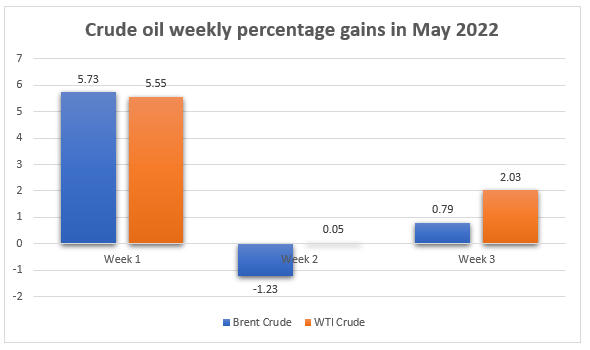 Natural gas prices retraced crude oil’s trajectory in May. Gas prices rose by a whopping 8.5% in the first week, only to decrease 2.3% in the second week. In the third week, gas prices rose by 4.94% on the back of stronger demand from Europe in wake of Russian gas import ban.

Among the precious metals, gold consolidated in early weeks of May. In the second week, gold slipped by 3.19% on anticipations of aggressive tightening by the Federal Reserve sparking a rally in the dollar. 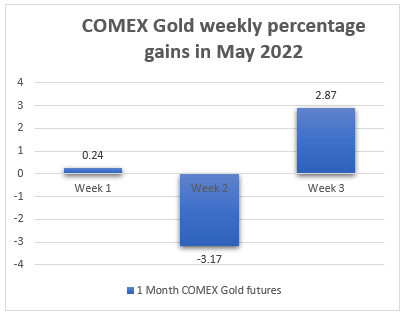 However, the prices gained in the third week as the Federal Reserve raised its benchmark policy rate by an aggregate of 75 basis points this year.

The trend was not limited to precious metals, a similar price trajectory was observed in several other commodities as well. 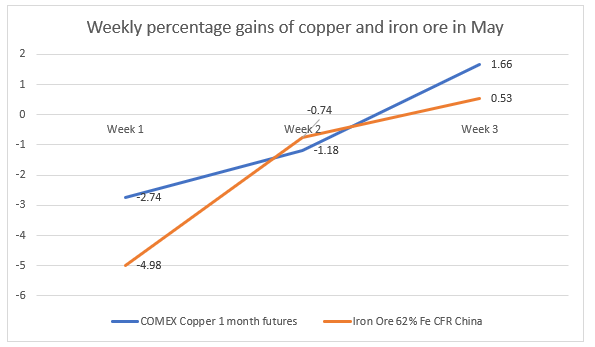 While casting a glance at the weekly performance of copper and iron ore futures, both metals performed similarly. The prices of both the base metals dropped significantly in the first week and then improved gradually in the next two weeks on expectations of easing of COVID-19 restrictions in China.

Commodities have been on a wild rally ever since Russia announced invasion of Ukraine. Commodity markets have been volatile in May. Among the energy commodities, prices of both crude oil and natural gas were driven by ban on Russian exports. The precious metals responded to the increase in benchmark policy rates by the Federal Reserve.