Gold prices slid further to below USD1,700 an ounce levels, falling on the second consecutive day in reaction to the rising US bond yields and the strengthening of US dollar. 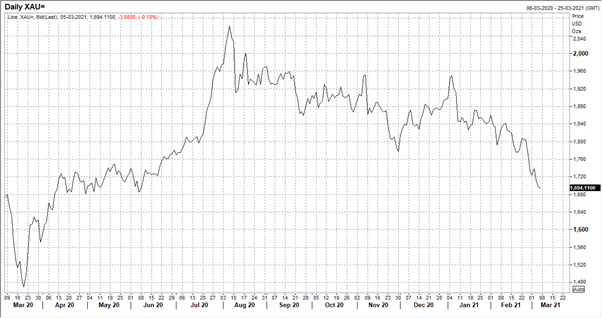 While the rising bond yields and strengthening of Dollar continues to drag the gold prices down, the resurgence of jewellery demand along with the investment demand might drive the prices of the yellow metal in the coming times. 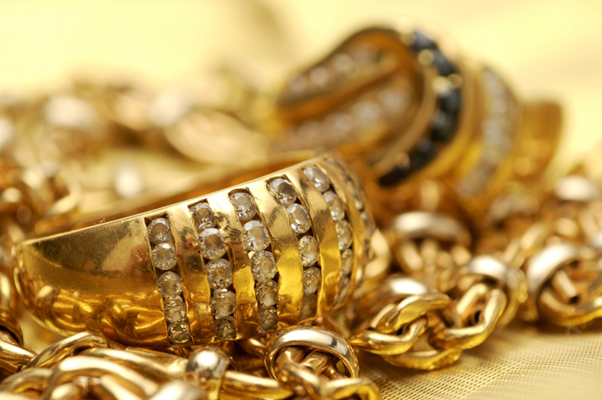 As per the energy and resource quarterly (December edition), the demand for jewellery in China and India, the two largest consumers, dropped 25% and 48% (y-o-y basis), respectively. The report further states that the physical gold demand would surge by 25.7% during the current calendar year.

Further the global budget deficits and inflation are anticipated to maintain the glitter of gold through 2021. The investors are cautious over the ballooning fiscal deficits due to the pandemic. The economic activities declined sharply and the governments across the globe had to offer stimulus packages.

A high inflation wave may follow the deficits in the budget. The past trends also indicate that the equity markets do not stand well against the inflationary forces, while the gold outperforms all major asset classes.

Australian gold has consistently been among the major exported commodities since the start of the modern gold rush in the 1970s. The country's gold export ranked fourth on the total export value basis, followed by iron ore, coal and petroleum gases.

Switzerland and China are among the leading importers of Australian gold. However, the country's total gold export decreased by 4.9% y-o-y in September ending quarter of 2020 to settle at AUD 7.0 billion. A decline in exports to China and the UK were the fundamental reason for the drop in export.

The country has the world’s largest economic demonstrated resource of gold. The Australian gold production rose by 4.8% y-o-y in the September ending quarter of 2020 to touch 81 tonnes. Fosterville mine and Boddington mine’s production rose significantly by 2% and 4.8% respectively during the September quarter, mainly due to higher grades of gold and mill throughput increase. Australia is forecasted to become the world’s leading gold producer in 2021.

The overall gold consumption is anticipated to rise by 3.1% in 2021 and 4.1% in 2022, touching the mark of 4,122 tonnes in 2022. Double-digit demand is forecasted in China and India, mainly driven by the jewellery sector. Europe and the US's gold demand are also expected to revive in the coming years but relatively slower.

Australia’s earning from gold exports are expected to hit record values of AUD 30 billion in 2020-21, up by 23%, driven by surging demand and higher exports.

Must Read: A look at six ASX Gold penny stocks that have doubled in 1 year

Newcrest Mining Limited (ASX:NCM) is a leading gold miner with gold assets in Australia, Papua New Guinea and Canada. The operational mines include Cadia, Telfer, Lihir and Red Chris, while Wafi-Golpu in PNG is in the advanced development stage.

Newcrest had produced 391koz of gold from Cadia and 378koz gold from the Lihir mine in 1H FY21. Production from other mines includes 185koz from Telfer mine and 24koz from Red Chris mine.

Evolution Mining Limited (ASX:EVN) controls four gold mines -- Cowal, Mt Carlton, Mt Rawdon, and Mungar in Australia. Red Lake in Canada and the Ernest Henry copper-gold project are two of its overseas interests. The company has a total mineral resource of 26.2Moz and an ore reserve of 7.3Moz. It has shared a production guidance in the range of 670-730koz with AISC to lie between AUD 1,240/oz and AUD 1,300/oz for 2021.

The shares of the company are currently trading at AUD 3.83. The company holds a market cap of AUD 6.68.

NST has provided production guidance in a range of 940-1,060 koz of gold for the year 2021. Northern Star had unveiled its merger with all-Australian gold growth company Saracen Mineral Holdings.