Canada’s main stock index shed some gains clocked in the previous session by falling 0.43 per cent on Wednesday, August 17, which could be susceptible to low-risk investors. The value approach to investing can help such investors weather near-term fluctuations.

The TSX value stocks mentioned in the article dole out steady dividend pay-outs. These Canadian stocks seem undervalued with low price-to-earnings (P/E) ratio (a financial measure that assesses the undervaluation or overvaluation of a given stock).

Suncor said its net income significantly grew to C$ 3.99 billion in Q2 2022, comparatively higher than C$ 868 million in the second quarter last year. This improvement in profitability came as Suncor’s adjusted operating profit jumped to C$ 3.81 billion in the latest quarter compared to C$ 722 million in Q2 2021, mainly due to increased crude and refined product realizations.

On the production front, the large-cap oil sand company reported an upstream production of 720,200 barrels of oil equivalent a day (boe/d), higher than the 699,700 boe/d posted in Q2 2021. The oil company and its joint venture partners announced to restart West White Rose Project, helping it generate long-term value. Suncor Energy will also deliver C$ 0.47 as a quarterly dividend on September 26.

Suncor stock swelled by over 78 per cent in one year. However, this large-cap stock currently possesses a P/E ratio of 6.3, which could mean an undervalued situation.  According to Refinitiv, the SU stock appears to be on a moderate trend with a Relative Strength Index (RSI) value of 51.16 and a trading volume of 9.43 million on August 17.

Nutrien reported US$ 14.5 billion in sales in Q2 2022, reflecting a year-over-year (YoY) spike of 49 per cent. The Canadian fertilizer company saw its gross margin zoom by 108 per cent to US$ 5.99 billion in the latest quarter relative to the prior year’s second quarter. The agriculture products company increased its net income by 224 per cent YoY to US$ 3.6 billion in the second quarter of this fiscal year.

Besides the income statement, the large-cap crop nutrition company revealed its intentions to expand its potash production capabilities to 18 million tonnes by 2025, considering supply uncertainty from Eastern Europe. Nutrien is scheduled for a quarterly dividend pay-out of US$ 0.48 on October 14.

Nutrien stock rose by over 24 per cent year-to-date (YTD). However, this fertilizer company held a P/E ratio of 7.4 as of writing. On August 17, the NTR stock recorded an RSI value of 66.99 (medium-to-high trend) as per Refinitiv.

The BMO stock jumped by nearly six per cent in 52 weeks. As per Refinitiv findings, this bank scrip held an RSI value of 69.99 on August 17, representing a high momentum.

Bank of Montreal is set to pay an increased quarterly dividend of C$ 1.39 on August 26. The Canadian lender recently in August stated its registration as a Securities Licensed company to expand its reach in Japan. 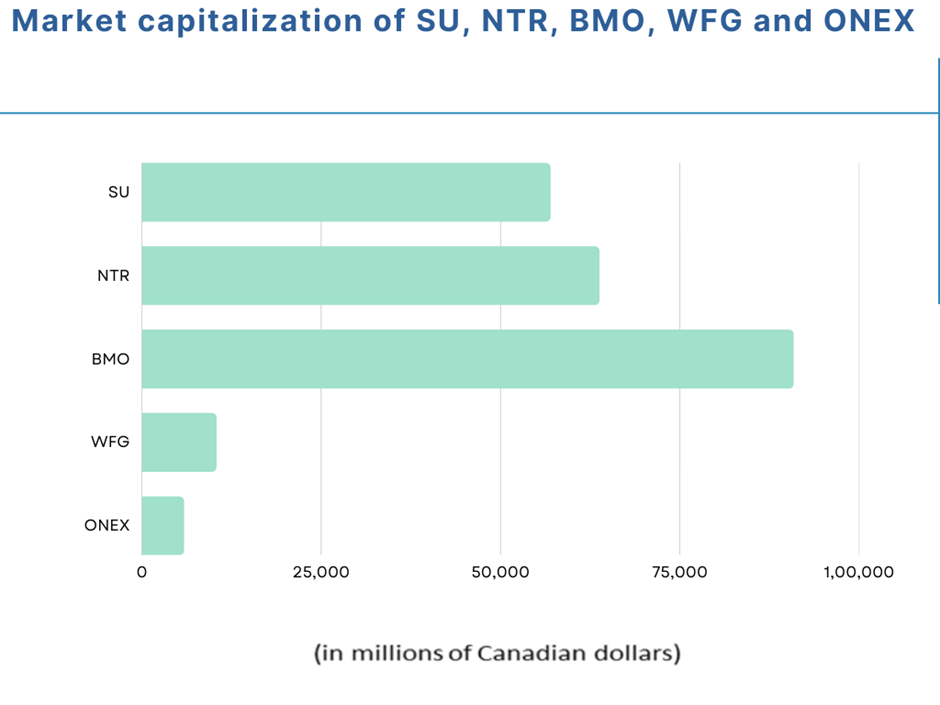 West Fraser Timber said sales amounted to US$ 2.88 billion in Q2 2022, lower than the US$ 3.11 billion posted in the prior quarter. Net profit in the latest quarter declined to US$ 762 million from US$ 1.09 billion in Q1 2022. The large-cap lumber company recently in August announced permanently reducing its combined production capacity by about 170 million board feet at Fraser Lake and Williams Lake sawmills. In addition, West Fraser also cut its plywood production by about 85 million square feet at the Quesnel mill.

At the present moment, West Fraser possesses a P/E ratio of 3.8. West Fraser stock plummeted by about four per cent in six months. However, the wood stock grew by nearly 36 per cent in 12 months. As per Refinitiv, the WFG stock had an RSI value of 55.94 on August 17.

Onex is a financial service firm that operates through two primary segments, investing, particularly in private equities, and asset and wealth management. The mid-cap firm posted distributable earnings of US$ 23 million in Q2 2022, less than US$ 175 million recorded in the second quarter of 2021. Onex reported a total fee-related loss of US$ 10 million in the latest quarter compared to earnings of US$ 1 million a year ago. Onex also saw a drop in its net earnings to US$ 184 million in the latest quarter, comparatively low from a profit of US$ 174 million in Q2 2021.

Long-term value investing can help investors overcome short-term economic shocks and downturns. Hence, value investors can explore the TSX stocks mentioned above to capitalize on long-term value. All these Canadian stocks, except for Onex, have large capitalization, but investors should exercise due diligence before investing.