Is Dye & Durham's Link deal in trouble and can it impact DND stock?

The most recent acquisition proposal made by Dye & Durham Limited (TSX:DND) was reportedly rejected by the board of Link Administration Holdings Ltd., a company based out of Australia. However, the company is likely in contact with the Canadian company.

Recently, Dye & Durham offered A$ 4.7 per share for Link compared to the offer made in June for A$ 4.3 per share. However, the offer was down from the one made in December for A$ 5.5 apiece.

Dye & Durham was most likely looking to acquire Link to enhance its business operations and increase its customer base in the important Australian and United Kingdom markets. However, the deal had also raised preliminary competition concerns from the Australian Competition and Consumer Commission.

Some experts believe that the Toronto-based technology company could consider exiting from the deal. From its recent statements, it appears that the Toronto-based company's amended offers for the Australian pension fund management platform have been turned down. However, there has been no final confirmation on an exit, although Dye & Durham noted in its statement on July 6 that it is "not prepared to make any further amendments".

What happened to the Dye & Durham-Link deal?

The technology sector has performed poorly in 2022, and the global selloff in the tech sector continues. The S&P/TSX Capped Information Technology Index declined 38.4 per cent year-to-date (YTD) and around four per cent on July 11.

Dye & Durham could be attempting to lower the price due to the significant decline in the tech equities. It is important to note that according to a prior agreement, the technology company would be responsible for a fee of A$ 28.62 million if it decides to end the arrangement.

The DND stock declined by about five per cent during the trading session on July 11 and closed at C$ 20.39 per share. It could continue to experience price fluctuations as investors remain skeptical of investing in the technology sector. 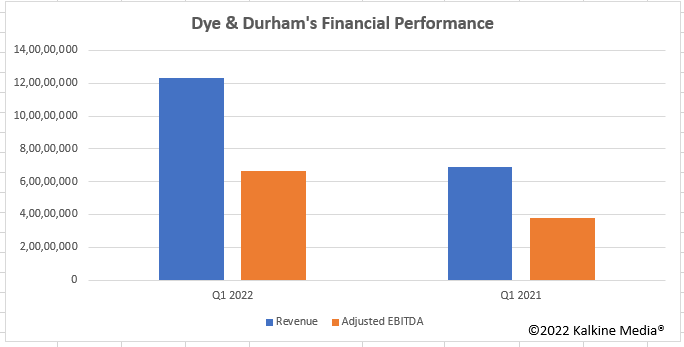 In Q3 2022, despite all the challenges, Dye & Durham's revenue increased by 78 per cent year-over-year (YoY) to $122.9 million. The surge in revenue was due to the closure of some acquisition deals.