Here’s a closer look at the trending tech stocks Intel Corporation and AMD, in which Canadian investors have shown interest:

The Santa Clara-based tech giant designs and manufactures microprocessors used in computer and data center markets. One of the world's largest chipmakers, Intel has acquired companies such as Altera, Mobileye, Nervana, etc in order to expand beyond computer fields.

Intel Corporation’s lowered revenue in the latest quarter saw its stocks sink nearly 11 per cent on Friday. The scrips are down 21 per cent year-to-date (YTD) and nearly 17 per cent in the last six months.

The shares plummeted to a low of US$ 44.61 (March 16) when the markets crashed during the pandemic. However, since then, its scrips rebounded nearly eight per cent in the next seven months.

Intel has an average share trading of 25.7 million in the last 10 days.

The US$ 204.2-billion market cap company made US$ 25.5 billion cash from operations and US$ 15.1 billion of free cash flow in the latest quarter. It has paid dividends worth US$ 4.2 billion this year.

The California-based tech juggernaut produces processors and other electronic parts for computers. It is expected to release its Zen 3 CPUs by the end of 2020.

Shares of Advanced Micro Devices Inc climbed three per cent during the intraday trading on Friday. It posted a growth of nearly 70 per cent so far this year. The pandemic-triggered market crash saw the AMD stock price slide down to a low of C$ 38.71 in March. Since then, however, it recovered nearly 112 per cent in the following seven month.

AMD scrips climbed nearly 47 per cent in the last six months and about 38 per cent in three months. It currently has a 10-day average share trading volume of 42.2 million.

Advanced Micro Devices Inc recorded a revenue of US$ 1.93 billion, up 26 per cent YoY, in its second quarter ending 27 June 2020. The chip titan attributed this increase in its revenue to its Ryzen and EPYC processor sales in the quarter. 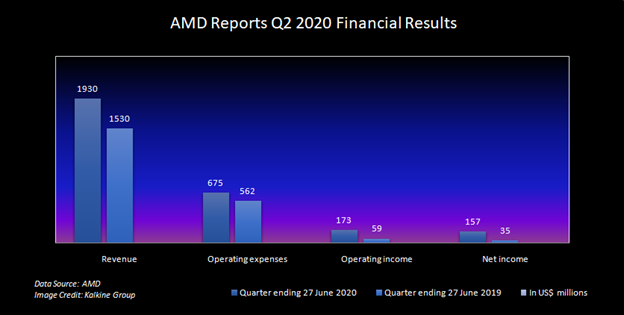 AMD’s gross margin of 44 per cent was up three percentage points YoY and its operating income amounted to US$ 173 million in Q2 2020.

In its second quarter report, AMD said that it expects a 42 per cent YoY rise in revenue in the third quarter of 2020, financials of which are set to be released on Tuesday, October 27.

Invest in Tech Stocks for a Brighter Future

Tech stocks have dramatically outpaced most of its peers and the broader market amid the COVID-19 pandemic. The combined effect of the lockdown, stay-at-home economy and the shift towards automation has taken the momentum in IT stocks to a two-decade high.

This rally in tech stocks is likely to continue as the world adapts to the ‘next’ normal.

But the sector is vast, and the market is teeming with shares of specific domains such as e-commerce, gaming, internet of things (IoT), artificial intelligence, virtual reality, cybersecurity, cloud computing, semiconductors and many more.

So, how one should analyze a tech stock? How to get your hands on futuristic, high-growth tech stocks?

With Kalkine you will find answers to those questions, with our in-depth technical reviews and fundamental analysis of organizational, we help investors making the right choices.

From best value to growth stocks in tech, this is your chance at bigger, better and definitive returns.