Smaller market capitalization, generally ranging from C$ 300 million to C$ 2 billion, can make players sensitive to market fluctuations, which could be daunting for low-risk investors. However, those with high-risk abilities and long-term views can consider quality small-cap stocks.

Here are five TSX small-cap stocks that Canadians can explore if planning for long-term investments.

Small-cap vehicles and parts firm Exco Technologies reported consolidated sales of C$ 129.25 million in Q3 FY2022, reflecting a year-over-year (YoY) rise of 12 per cent. Exco said that its sales increased in both segments, Automotive Solutions (up by six per cent) and Casting and Extrusion (up by 20 per cent) in Q3 2022 relative to Q3 2021.

Stocks of Exco Technologies spiked by over nine per cent quarter-to-date (QTD). This automotive stock was up by almost 13 per cent from a 52-week low of C$ 7.75 (July 15). According to Refinitiv data, Exco stock appears to be slowly gaining momentum with an increasing Relative Strength Index (RSI) value of 68.11 on Friday, July 29, nearing the overbought mark of 70.

Uni-Select is a Boucherville, Québec-headquartered company distributing automotive refinish, industrial coating and other such products under different banners in the US, Canada and the UK. The Canadian auto parts company reported sales of US$ 409.6 million in Q1 2022, up by 10.7 per cent from Q1 2021. On the profitability front, Uni-Select significantly improved its net income to US$ 7.73 billion in the latest quarter compared to US$ 213 million in the same quarter of 2021.

Recently, in late June, Uni-Select agreed to acquire a family business, Maslack Supply Limited, which was founded in 1959 and currently operates at 13 locations in northern Ontario. With this definitive agreement, the C$ 1-billion market cap company aims to increase its presence in Ontario.

The UNS stock galloped by almost 143 per cent in 52 weeks. This auto stock gained by nearly 44 per cent year-to-date (YTD). As per Refinitiv findings, the UNS scrip appeared to be on a bullish trend as its RSI value of 71.15 on July 29. 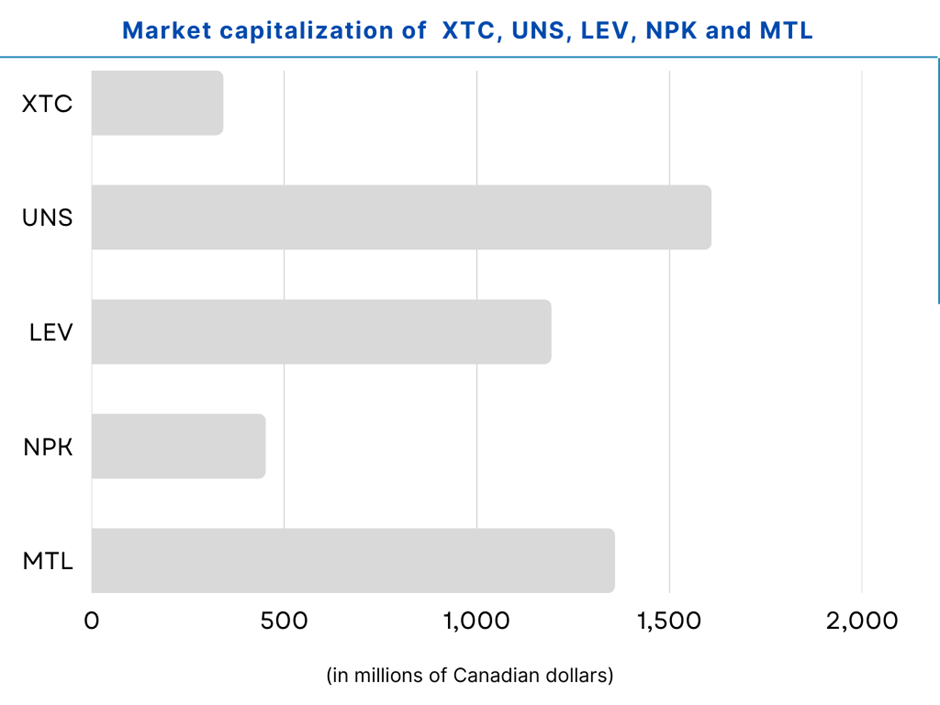 Lion Electric is known for manufacturing zero-emission vehicles, including electric trucks and buses. Lion reported increased revenue of US$ 22.64 million in Q1 2022, notable higher than US$ 6.22 million in Q1 2021. The electric vehicles (EV) company also saw its profitability improve substantially with net earnings of US$ 2.1 million in the latest quarter compared to a loss of US$ 16.11 million a year ago.

The LEV stock dipped by almost 50 per cent this year. However, this EV stock seems to have recovered slightly as it rose by nearly 16 per cent QTD. As per Refinitiv findings, LEV stocks had an RSI value of 53.62 (moderate trend) on July 29.

Stocks of Verde Agritech swelled by almost 211 per cent so far in 2022. The NPK stock zoomed by over 663 per cent in 12 months. According to Refinitiv data, NPK stocks saw a rising RSI value of 63.55 on July 29, which denotes a medium-to-high trend.

Mullen Group offers various transportation and logistical services across North America through its network of independently-operated businesses. Mullen saw its revenue jump by 66.9 per cent YoY to C$ 521.5 million in the second quarter of fiscal 2022.

Stocks of Mullen Group spiked by over 30 per cent in one month. According to Refinitiv, MTL stocks had a high RSI value of 81.11 on July 29, which signals to high momentum.

The TSX small-cap stocks mentioned here reported notable top-line growth in their respective latest quarter. Some of the above companies also saw a significant surge in their stock prices amid many macroeconomic factors. For instance, fertilizer shortage mainly fueled by the Ukraine crisis seems to have positively influenced Verde Agritech. Hence, risk takers could explore these healthy small-cap stocks for the long term.