Should you buy Enbridge (ENB) stock as it partners with Pacific Energy?

Enbridge (TSX: ENB) gained traction at market opening on Friday, July 29, after it announced a partnership agreement with Singapore-headquartered Pacific Energy to construct and operate the Woodfibre LNG project located in Squamish, British Columbia. According to the agreement, Enbridge will own a 30 per cent equity stake while Pacific will retain the remaining 70 per cent stake in the 2.1 million-tonne-per-year LNG export facility.

At the time of writing, the ENB stock was up by 0.2 per cent from the previous close. Also, Enbridge released its financial results for Q2 2022. Let us have a deep dive into its quarterly financial performance.

Enbridge, which reports according to the US Generally Accepted Accounting Principles (GAAP), said its profit was C$ 450 million in Q2 2022, down by C$ 944 million from C$ 1.39 billion in the same quarter of the previous year.

Furthermore, Enbridge also saw an increased distributable cash flow of C$ 2.74 billion in the second quarter this year compared to C$ 2.5 billion in the same period a year ago. 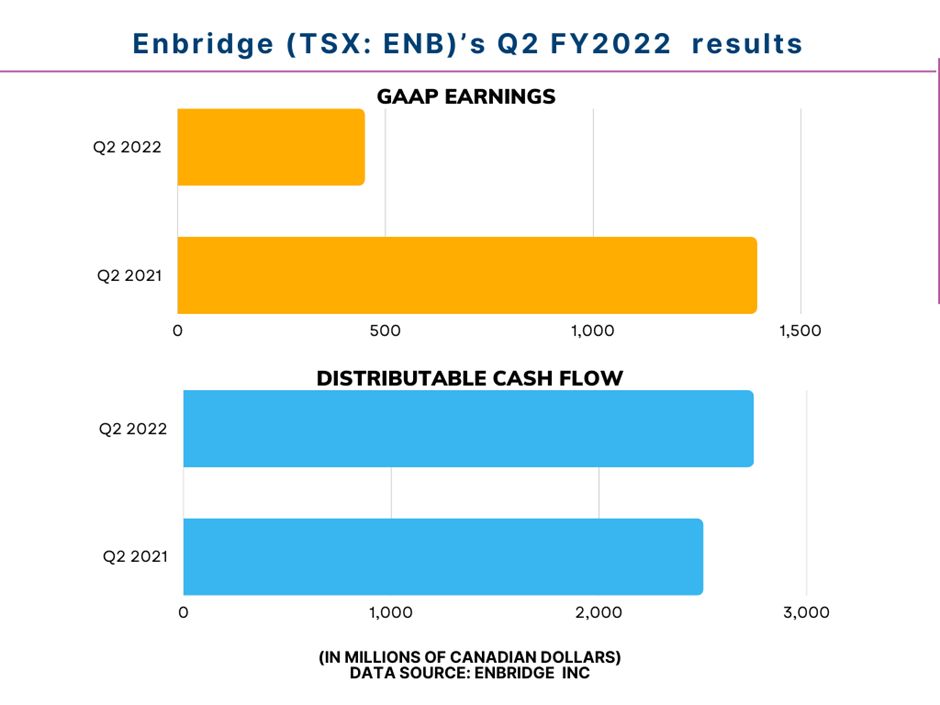 The ENB stock zoomed by over 16 per cent in 12 months. The pipeline stock slipped by nearly four per cent from a 52-week high of C$ 59.69 (June 8). According to Refinitiv, ENB stock seems to be on an upward trajectory, with a Relative Strength Index (RSI) value of 68.02 on July 28, supported by a trading volume of 5.8 million shares.

The TSX Capped Energy Index also gained by over 41 per cent so far this year. Enbridge is set to disburse a quarterly dividend of C$ 0.86 on September 1. With an investment agreement for Woodfibre, the Canadian midstream company could extend exposure to the global LNG markets.