The Canadian utilities sector is facing radical transformation that was long pending. Fast adoption of digital technologies and changing customer expectations have already made the energy and utility industry more complex and competitive.

According to consulting firm PwC, training plans in 66 per cent of Canadian power utilities are not yet ready to tackle technological changes at the workplace. Another Seventy-three per cent of the industry noted blended skills are a plus for the future of work. Survey of CEOs of the power and utility industry revealed that 75 per cent of them are concerned about availability of key skills.

While challenges exists on several fronts, the S&P/TSX’s Capped Utilities Index has maintained a steady growth of 6 per cent over the last one year.

The utilities and ENR (energy and natural resources) sectors are lagging behind other industries when it comes to implementation and leveraging of demand-driven supply chain technology, says a report by consulting firm KPMG. 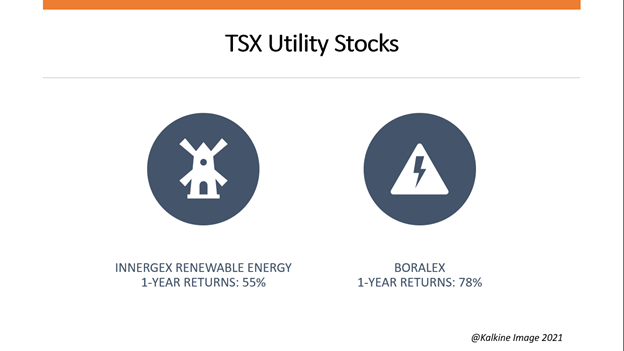 Stocks of the Canada-based electric utility company has shown a growth of over 78 per cent over the period of one year. Sale of energy through long-term contracts to customers of Canada, USA and France forms a major source of revenue for this company.

As per the company statement on February 2, 2021, Boralex has announced the closing of the acquisition of controlling interests in a portfolio of seven solar plants in the US at a price of C$277 million (US $215.6 million).

Innergex Renewable Energy, an independent renewable power producer with over 30 years of experience, has been creating a lot of buzz by outperforming its peers in the S&P/TSX Capped Utility Index.

The stock advanced by over 55 per cent in the span of one year.

With over C$ 5 billion in market cap, coupled with this stupendous stock returns in just one year, Innergex has earned the attention of investors.

One of the biggest advantages of Innergex is that the future is favorable for entities engaged in the production and distribution of clean and renewable energy.

Especially after the election of Joe Biden as the 46th president of the United States, who has indicated support for clean energy and has plans to spend at least $2 trillion on building America's infrastructure.

With production facilities spread over four countries Canada, the United States France and Chile Energex boasts of gross installed capacity of 3694 MW and an energy storing capacity of 150 MWh.