The TSX energy index remained in the red for two consecutive sessions after slipping by 4.21 per cent on Wednesday, August 3. Meanwhile, the Organization of the Petroleum Exporting Countries (OPEC) and its allies agreed to slightly boost production output by 0.1 million per day (mpd) for September.

As oil volatility stemming from macroeconomic factors such as the Russia-Ukraine invasion continues, Canadian investors with risk abilities may look for quality oil stocks. Hence, Kalkine Media® presents list of TSX oil stocks that might be worth exploring.

Tourmaline said its cash flow increased by 137 per cent year-over-year (YoY) to C$ 1.35 billion in the second quarter of fiscal 2022. The oil producer also revealed that its net debt stood at C$ 430 million at the end of June 2022, which was below its long-term debt target. Tourmaline can now finance Conroy Project and continue implementing its free cash flow (FCF) allocation strategy.

The TOU scrip galloped by almost 138 per cent in 12 months. According to Refinitiv, TOU scrips held a Relative Strength Index (RSI) value of 58.64 on August 3. The RSI ranging from 30 to 70 generally denoted moderate momentum.

Imperial Oil reported a net profit of C$ 2.4 billion in Q2 2022, notably up from C$ 366 million in the second quarter last year. Imperial also declared a quarterly dividend of C$ 0.34 scheduled for payment on October 1.

The IMO stock soared by nearly 25 per cent year-to-date (YTD). In 12 months, this large-cap oil stock grew by almost 63 per cent. As per Refinitiv information, Imperial stocks recorded an RSI value of 44.72 on August 3. 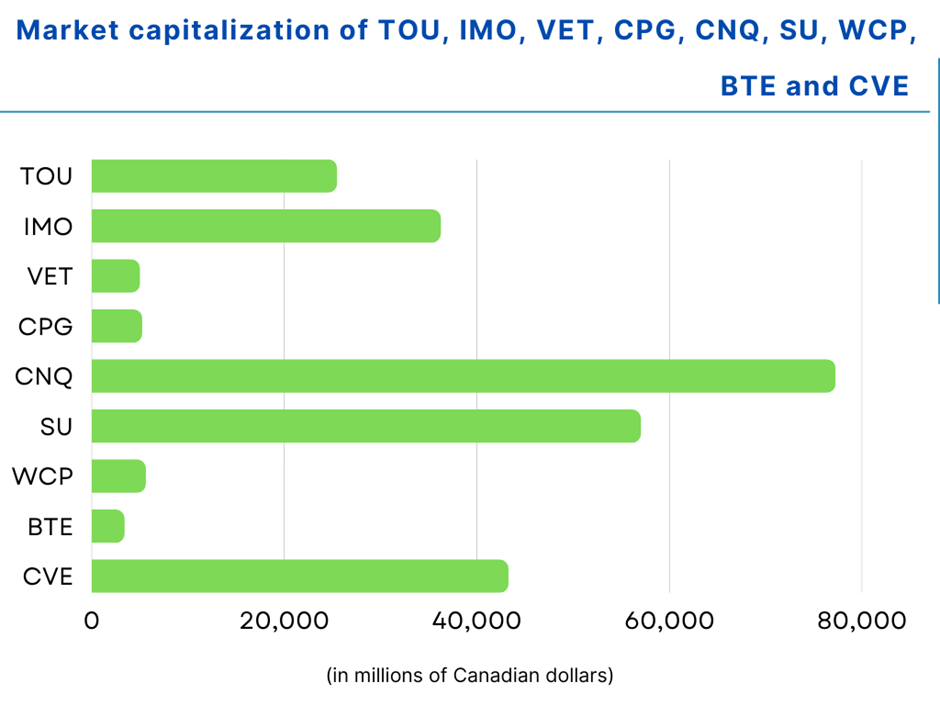 Vermillion stocks swelled by over 89 per cent so far this year. This energy stock gained by more than 227 per cent in a year. As per Refinitiv findings, VET stocks saw an RSI value of 55.1 on August 3.

Crescent Point said that an operating netback of C$ 76.57 per barrel of oil equivalent (boe) helped its adjusted funds flow reach C$ 599.1 million in Q2 2022 relative to C$ 387.8 million posted in the same quarter last year. The C$ 5 billion-market cap company also increased its quarterly dividend payout to C$ 0.08 (payable on October 3). The CPG stock spiked by almost 91 per cent in 52 weeks. On August 3, Crescent stocks had an RSI value of 45.99, with 5.37 million shares exchanging hands, as per Refinitiv data. 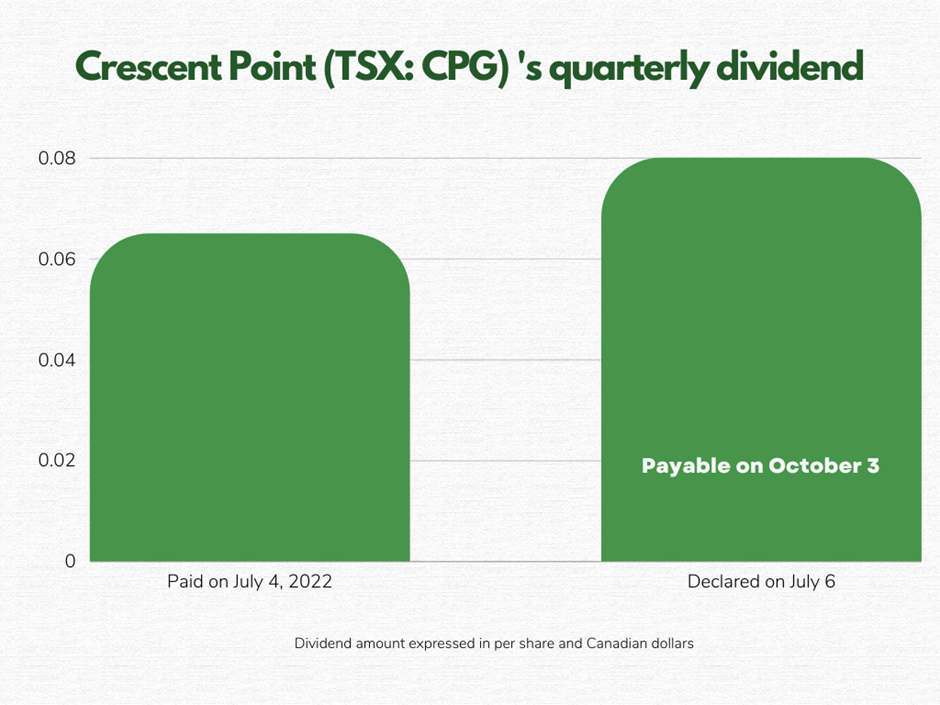 Canadian Natural is one of the major oil producers in Canada, with a market capitalization of C$ 77.22 billion. Canadian Natural’s debt-to-equity (D/E) ratio was 0.36 (below one), which generally depicts a low financial risk. The ROE of this large-cap oil company was over 26 per cent. Canadian Natural stocks jumped by over 60 per cent in a year. According to Refinitiv data, CNQ stocks recorded an RSI value of 48.06 on August 3, backed by a trading volume of 3.06 million.

Suncor Energy is one of Canada’s largest integrated oil companies with oil sand operations and refining business. Suncor increased its quarterly dividend to C$ 0.47, which was earlier C$ 0.42. The oil sand company recorded a D/E ratio of 0.47, representing a low financial risk. The SU stock zoomed by nearly 67 per cent in one year. As per Refinitiv data, Suncor stocks had an RSI value of 45.02 on August 3.

Whitecap Resources saw its stock surge by over 59 per cent in 12 months. The mid-cap firm posted an ROE of about 80 per cent and a D/E ratio of 0.19. In addition, Whitecap doles out a monthly dividend of C$ 0.037, payable on August 15. According to Refinitiv, WCP stocks saw an RSI value of 46.6 on August 3.

The C$ 3-billion market cap company, Baytex, has oil and gas operations in the US and Canada. The BTE stock plunged by roughly eight per cent to close at C$ 6.04 on August 3. However, BTE stocks still gained by over 173 per cent in 12 months. Baytex stocks had an RSI value of 44.45 on August 3, as per Refinitiv.

Cenovus said its cash from operating activities grew by 118 per cent to C$ 2.97 billion in Q2 2022 compared to Q2 2021. The large-cap oil company also posted an increased net income of C$ 2.43 billion in the latest quarter compared to C$ 1.62 billion in the same quarter last year. The CVE stock jumped by almost 118 per cent in the past 12 months. According to Refinitiv data, CVE stocks held an RSI value of 43.66 on August 3.

After falling by over six per cent month-to-date (MTD), the TSX energy index still climbed roughly 37 per cent this year. Hence, risk investors looking to capitalize from oil fluctuations can explore the TSX stocks. In addition, some of these oil companies also pay dividends and could enhance your portfolio income stream.