On that note, let us explore some of the mid-cap stocks.

The bank paid a quarterly dividend of C$ 0.29 per share to its shareholders on September 23. The dividends grew at a five-year average of 5.31 per cent, and the dividend yield was 3.14 per cent on September 29.

The total revenue posted by Canadian Western Bank was C$ 263.2 million in the third quarter of fiscal 2021, an increase of 16 per cent Year-over-Year (YoY). Its total loan portfolio grew by nine per cent YoY, and net income was C$ 86 million in the same quarter. 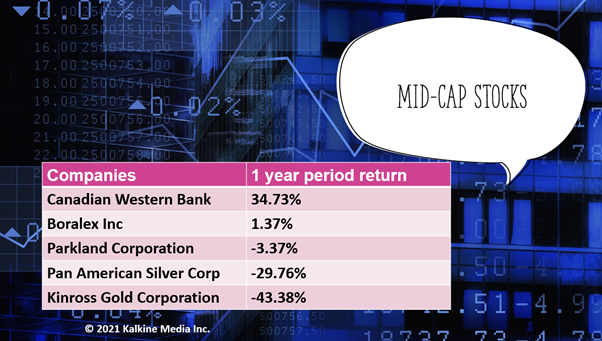 The energy company's earnings per share (EPS) was 0.39, ROE of 4.58 percent as per its valuation metrics. The company held a market cap of C$ 3.86 billion on September 29.

The stocks of Boralex were priced at C$ 37.62 at market close on September 28. The stock price only increased by one per cent over the past year.

Boralex posted revenues of C$ 147 million from the sale of energy in Q2 FY21. Wind production increased by 33 per cent YoY in Q2 FY21, and its EBITDA was C$ 106 million in the same quarter. During the quarter, a total of 743 megawatts was added from the new projects of the company.

The oil and gas company distributes fuel and petroleum products used by businesses, bikers, commuters, and wholesalers in Canada and the US. Parkland is expected to issue a monthly dividend of C$ 0.103 to its shareholders on October 15. The dividend yield stood at 3.47 per cent on September 29.

In Q2 FY21, Parkland posted operating revenue of C$ 5.02 billion and adjusted EBITDA of C$ 322 million. During the quarter, the company acquired Conrad & Bischoff Inc to its US portfolio. The acquisition is believed to strengthen their supply chain in the US.

The dividend-paying mining company develops and explores silver mines. The company also sells zinc, lead, gold, and copper, which are derived as byproducts from its mining operations.  On September 3, a quarterly dividend of US$ 0.10 was paid to its shareholders, while the dividend yield was 1.66 per cent. The five-year dividend growth rate was 26.05 per cent.

The Canadian gold producing company held a market cap of C$ 8.48 billion and 1.26 billion outstanding shares (at the time of writing). Kinross Gold paid a quarterly dividend of US$ 0.03 on September 2. The dividend yield stood at 2.24 per cent.

It is believed by many analysts that mid-cap stocks offer a better risk-return ratio that is less volatile than penny and small-cap stocks. However, a risk exists nonetheless.