The Federal Reserve announced that it had hiked the interest rates to tackle the issue of rising inflation. The US central bank said it hiked the benchmark rate by 0.5 per cent, the most significant hike in more than two decades.

Recently, the central bank in Canada had also increased the interest rates. It indicated that the rates could rise further to fight the rapidly rising prices of products and services.

Some analysts believe that financial stocks could be an option worth exploring when interest rates are hiked. On that note, we have selected five financial stocks that could be considered while reshuffling an investment portfolio:

Manulife has business operations in Asia, Canada, and the United States. It offers wealth management and insurance services. The MFC stock closed 1.2 per cent higher at C$ 25.43 per share on May 4.

The stock of Manulife Financial Corporation is volume active, and 11.2 million MFC shares were traded during the trading session on Wednesday.

The MFC stock has a price-to-book (P/B) ratio of 0.966, and some analysts believe any value under one is considered a good value. Hence, it could be assumed that it is a growth stock.

Sun Life Financial became the Toronto Raptors' official health and wellness partner, a basketball team. The insurance company is expanding its business operations, and its stock recorded a surge of 1.1 per cent on May 4.

The SLF stock has a history of significant volume, and it is one of the most active stocks listed on the Toronto Stock Exchange. The 10-day average volume of SLF shares was approximately 1.8 million.

Sun Life has a history of paying regular dividends, and its dividend yield is about 4.1 per cent.

The property and casualty insurance company had a stock price of C$ 177.3 per share at market close on May 4. Intact Financial completed a C$ 150 million preferred shares offering in March this year.

Due to the growth in financial results, the insurance company had increased the dividend by C$ 0.09 per share, representing an increase of 10 per cent.

It is one of the largest life insurance companies in Canada and has a presence worldwide and is not only limited to the North American markets.

Great-West Lifeco's debt-to-equity (D/E) ratio is 0.40, which means that it has 40 cents of debt on every dollar of equity, indicating that the company is not debt-ridden.

On May 4, the insurance company announced the results for the first quarter and said its net earnings payable to common shareholders jumped to C$ 770 million from C$ 707 million in Q1 2021. 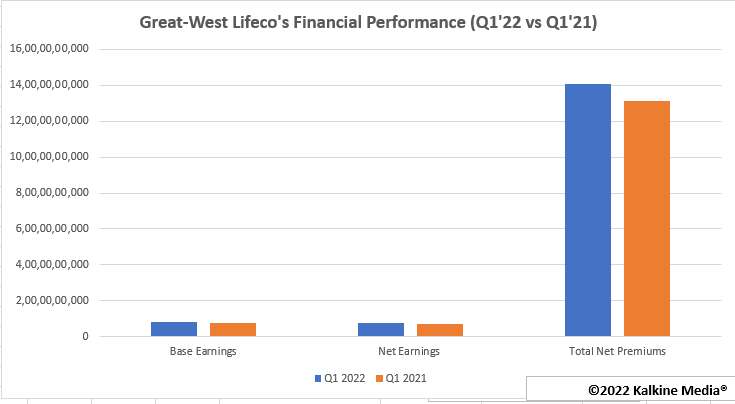 It is a holding company and provides property and casualty insurance services through its subsidiaries. On May 4, the FFH stock price was C$ 698.53 apiece after it jumped 2.2 per cent during market trading hours.

Fairfax distributed an annual dividend of US$ 10 per unit, and its dividend yield is 1.8 per cent.