Stocks of Precision Drilling Corporation (TSX:PD) declined by 6.7 per cent at market open on Thursday, October 21, as the company said that it lost C$ 38 million in the third quarter of this year as drilling rammed up.

In the latest quarterly report, the company, which claims to be the largest drilling rig contractor in Canada, said that the drilling activity was triple compared to the activity in Q3 2020. Fifty-one average active rigs represented the highest third-quarter average since 2018.

Precision Drilling said that the current industry fundamentals look promising for its business. The company said that the rising oil and gas prices and rapidly declining drilled but uncompleted well inventories indicate a higher drilling activity in the core markets. 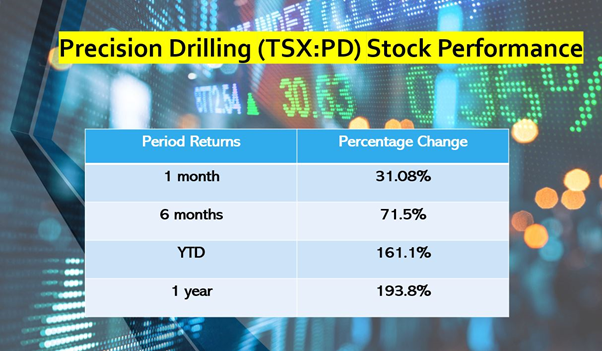 In Q3 2021, an adjusted EBITDA of C$ 59 million was only possible due to the company's cost discipline and improved spot pricing across North America.

The oil and gas company is looking to expand its presence internationally, and its drilling operations continue with six active rigs in Kuwait and Saudi Arabia. In addition, during Q3 2021, Precision Drilling received extension notification for two Kuwait rig contracts.

The company is looking to activate its idle rigs in 2022 and said that it is confident that it will do so.