The year 2022 has not been very good for equities in general. In such copy times, with inflation high and a rise in interest rates expected, many investors tend to take away money from stocks and put them in more stable fixed-return investments.

The Canadian cannabis sector is particularly hit this year. The S&P/TSX Cannabis Index is down 30.25 on a year-to-date (YTD) basis.

That said, US senators from both sides of the political divide have lately been pushing for the SAFE Banking Act to pass. This should allow cannabis companies to access banking services.

Should it pass, the sector might see revival. So, let’s look at some TSX-listed pot stocks.

The stock has fallen to this range on multiple occasion this year but has not gone lower. The stock has rebounded 14 per cent in a week.

The company has been experiencing loss so its price-to-earnings (P/E) ratio is in negative territory.

TLRY has gained four per cent this week and is in the green by over two per cent on a week-to-date (WTD) basis.

TLRY’s P/E ratio is 13.3, which essentially represents the dollars invested to earn one dollar. It is the only stock on this list with a positive P/E ratio.

ACB has recovered three per cent in a week. However, it is down 43.5 per cent YTD.

It is also experiencing loss and has a negative P/E ratio.

CRON closed Tuesday at C$3.94 and it has recovered six per cent in the past week. 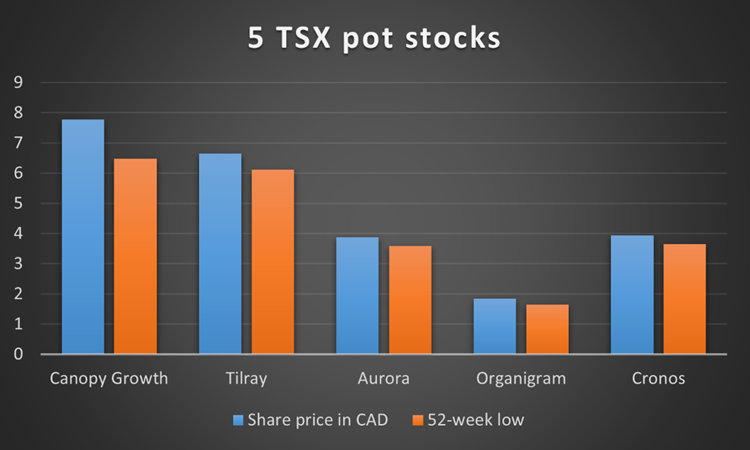 Passage of the SAFE Banking Act may bode well for Canadian marijuana stocks and perhaps revive the sector. All the above stocks are on the rebound and are available for purchase at prices close to their 52-week lows as seen in the graphic.

These are some of the biggest cannabis companies on the TSX going by market cap and even of the healthcare sector. However, it should be noted, that the sector has seen volatility.