Aphria Inc. (TSX: APHA) that produces and sells medicinal and recreational cannabis achieved a net revenue of C$ 153.6 million in the third fiscal quarter of 2021 (ending February 28). The net revenue was up by 6.4 per cent year-over-year (YoY).

Impacted by the lockdowns and COVID-19 restrictions in the third quarter, the net revenue was down by 4.3 per cent when compared to the previous quarter's C$ 160.5-million net revenue.

The gross profit was C$ 31.6 million, a decrease of about 47 per cent year-over-year.

A Look At Aphria's Stock 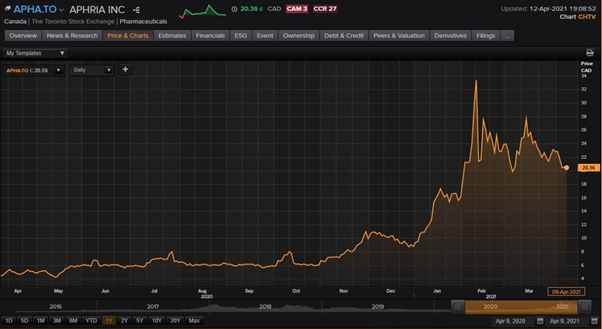 Aphria and Tilray Inc. (NASDAQ: TLRY) are all set to complete their merger soon this month. The combined entity is likely to be the world's largest global cannabis company.

On April 14, Aphria will host a meeting with the shareholders to approve this proposed merger. Irwin D Simon, Chairman and Chief Executive Officer of the company said that on behalf of the board of directors, the company recommends its shareholders to vote for the resolution.