Cannabis stocks took a bit of a tumble on Thursday, October 15, following the release of Aphria Inc’s (TSX: APHA) first quarter fiscal results. While its net loss was less than market analyst’s estimations, so was its revenue for the quarter, which the pot company blamed on the coronavirus pandemic. Meanwhile, Aurora Cannabis (TSX: ACB) made news for its recent exit from Australian pot firm Cann Group.

The S&P TSX cannabis index registered a drop of 6.1 per cent on Thursday at closing. It also currently records a 43.6 per cent year-to-date decline. However, pot sales have been at a record level amid the pandemic, with the cannabis market contributing over C$9.6 billion to Canada’s GDP in July, as per a Statistics Canada report.

Earlier this week, on October 12, cannabis shares surged on the stock markets after the federal legalization of recreational marijuana in the US became a hot topic of discussion at the presidential campaigns. While Republican Governor Phil Scott hinted at allowing recreational marijuana in his state Vermont, Democrat vice presidential candidate Kamala Harris talked about Joe Biden legalizing cannabis at a federal level if elected to the White House.

Let’s delve into analyzing the stocks of Aphria Inc and Aurora Cannabis which are currenting trending hot on the TSX.

One of Canada’s top pot manufacturers, Aphria Inc stocks spiked ahead of the release of its latest quarter results on Thursday. However, following the announcement, its scrips tumbled nearly 18 per cent during intraday trading.

Aphria stocks are among the most active stocks on the Toronto Stock Exchange, with an average share trading volume of five million in the last 10 days.

The Leamington-based company recorded a net revenue of C$ 145.7 million in its first quarter earnings ending on 31 August 2020. While this was a 15.5 per cent year-over-year (YoY) growth, it was down 4.3 per cent quarter-over-quarter (QoQ).

Aphria’s net cannabis revenue stood at C$ 62.5 million, up a whopping 103 per cent YoY. Its adjusted EBITDA of C$ 10.4 million for cannabis business registered a growth of 11 per cent QoQ.

Aphria Inc shares currently record a decline of 2.3 per cent year-to-date (YTD). Since collapsing to a low of C$ 3.03 (March 17) amid the March market crash, its scrips climbed nearly 110 per cent in the following seven months.

Aurora Cannabis recently announced that it has disposed of its position in the Australian medical marijuana company, Cann Group Ltd. The Alberta-based cannabis producer sold off its 11.84 per cent stake in Cann Group to ‘undisclosed buyers’ on October 9, 2020. The stake sale comes in the wake of Aurora incurring an impairment charge of about C$ 37.2 million on its Cann Group position for the fiscal year ending 30 June 2020.

Aurora Cannabis bore many impairment losses in its fiscal fourth quarter ending 30 June 2020, including a charge of C$ 86.5 million for fixed asset impairment, an inventory impairment of C$ 135 million and a goodwill write-down of C$ 1.6 billion. 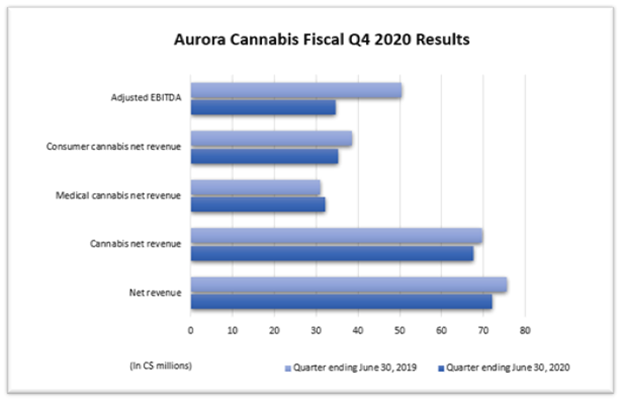 However, Aurora Cannabis recorded an adjusted EBITDA of C$ 34.6 million in the latest quarter, down from C$ 50 million in Q3 FY20.

Shares of Aurora Cannabis have been down nearly 82 per cent this year. Its scrip slumped 52 in the last six months and about 67 per cent in three months.