After flirting for days on the brink of landmark 20,000, Canada’s leading equity index Toronto Stock Exchange (TSX) finally touched 20,014.70 for the first time on Tuesday, June 1. The index attained this historic level within the first two hours of trading session. After a pandemic-ridden 2020, equities are finally blossoming, and Canadian investors are warming up to the share market. The index has gained over 30 per cent in the last one-year.

The TSX returned about 14.51 per cent this year. Its quarter-to-date gains stands around 6.75 per cent with the price-to-equity ratio is 18.44. The bourse also holds a dividend yield of 2.98 per cent.

Energy and technology were the top performing sectors on Tuesday morning, while utilities and healthcare traded in red. 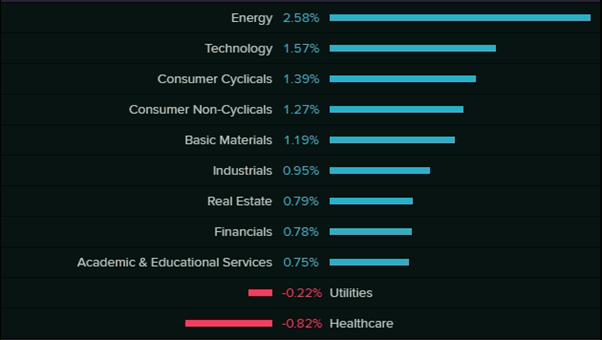 Energy stocks have been leading the North American markets after the Organization of Petroleum Exporting Countries and its allies (OPEC+) announced output hike in July. Crude oil prices rose again on Tuesday with the WTI futures trading at a two-year high of US$67.66 at 0610 GMT while Brent futures topped US$70, its highest since March this year.

Inter Pipeline rose on the news of its C$8.3-billion acquisition deal by Pembina Pipeline Corp (TSX: PPL), which is set to create the largest pipeline giant in Canada.

Positive sentiments also spread in the markets after the Bank of Nova Scotia (TSX:BNS) posted net income of C$2.45 billion in the latest quarter leading to the Big Six lenders clean sweep on earnings.

Canada’s Gross Domestic Product (GDP) grew for the eleventh straight month, offsetting the deep nosedive accrued during the peak pandemic months. The real GDP advanced by 1.1 per cent in March, reported the country’s data agency Statistics Canada on Tuesday. However, the figure is still nearly 1 per cent below the level observed in February 2020, before the pandemic set.  The country’s real gross national income grew by 2.7 per cent.